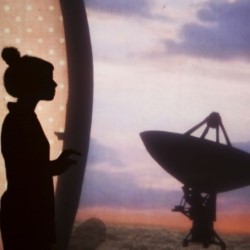 Manual Cinema, based in Chicago, have created an entirely original show, using overhead projectors, shadow puppets, actors (non verbal) and live music. As well as the screen you can watch the team working the overhead projectors with clock work precision, the live band, a sound technician and the two actresses playing Lula (Sarah Fornace) and her mother (Julia Miller), with a look that adds to the surreal dystopian 50’s vibe that characterises the performance.

Lula lives in a caravan with her mother in a satellite array in the desert in 50’s America. There are scenes of rocky, desert landscapes where Lula and her mother share their love of space. However Lula is growing up and when she hears the Baden Brothers on the radio, she decides to head to the big city for an adventure of her own. The hand illustrated acetates add to the naivety and innocence of Lula but the dream and reality conflict and Lula faces difficulties in every direction. With nobody to look out for her, she is lost in a big city, eventually returning to her anguished mother.

Although at times I found it hard to follow, the story was peppered with social and political observations from this period of American history, and themes of fantasy sit with more uncomfortable themes of isolation and political unease. The music adds to the surreal but intense atmosphere of the play with guitar, percussion and cello, it’s quite modern and edgy in style but switches at times to a more quaint americana. I enjoyed the simplicity of the slides, and the attention to detail and timing was impeccable. I would highly recommend this show for its sheer originality and theatricality. Very cleverly put together, don’t miss this theatre group!

Posted on August 22, 2017, in Uncategorized. Bookmark the permalink. Leave a comment.