← Not About Heroes
Lord Dismiss Us →

We arrived with the expectation of seeing a dramatization of Shakespeare’s earliest narrative poem, in fact his first smash hit! As we took our seats we were confronted by a solitary figure in a crumpled suit seated on a bench. Preparing himself and the audience for the show, the figure pretended to go over some notes that sat on his lap. When the action started, Actor/Director Christopher Hunter literally exploded into life in a highly strung, thundering performance that kept us enthralled from beginning to end. I can honestly say I have never seen anything quite like it before. This creation, from The Noontide Sun & Close Quarters Productions, served to prove once more, if any proof were needed, the greatness infusing Shakespeare’s text, reaching down to us through five centuries with as great an effect as if it had been written yesterday. Hunter’s performance offered us a highly erotic illumination of the poem’s dialogue, cutting through any notion of political correctness. It was a wonderful marriage of performance artist and actor, which came together like a great noon tide, absolutely filling the stage and the room with philosophical revelry. 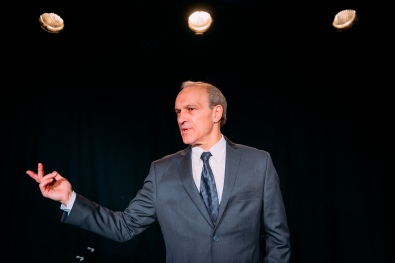 If the content of was meant to shock, I would say it certainly succeeded. The powerful story of sex and desire gripped you from the start, then drew you deeper down to the depths as the tragic tale unfolded. Addicted to the idea of the love of Adonis, the wretched Venus finally dragged them into a state where for the sake of this love he would lose all of his innocence and beauty and, in the end, his life. Shakespeare wrote Venus and Adonis at a time when all the London theatres were closed due to the plague outbreak in 1592. Perhaps these tragic circumstances heightened the young writer’s perceptions, lending further poignancy to the dark and disturbing themes and the power and sensuality of the writing.The sheer lavish virtuosity of Mr Hunter’s performance was utterly compelling as he single-handedly portrayed the dialogue between the ill-starred lovers with a breath-taking freedom of movement entirely devoid of any embarrassment or awkwardness. Firing on all cylinders, constantly moving, gesticulating, using his whole body to show us the characters of the aging goddess and her young lover. The splendid language was laid before us with a wonderfully accomplished delivery that oozed meaning, beauty and depth. And all at a level of never giving enough and always discovering strength even in weakness. If the production had swelled any further, you felt the room would have burst! 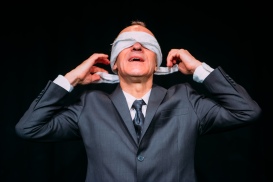 Shakespeare’s legacy is surely to bring out only the best in acting and production, and this performance is no exception. In fact the joyful and fearless presentation, delivered at very close quarters in an intimate space, brilliantly succeeds in enhancing one’s understanding and appreciation of the work. I suppose that a large part of the appeal is the feeling that you are really enabled to have an intimate relationship with the words and what they really mean in a very direct way, without the distraction of any modern technology or gimmicks. This is a bright hour of excellent, fast paced, passionate and exhilarating entertainment. A real treat!

Posted on August 16, 2017, in Uncategorized. Bookmark the permalink. Leave a comment.

← Not About Heroes
Lord Dismiss Us →