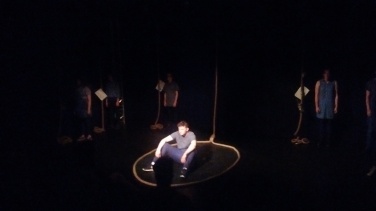 As I type these words, a certain young theatre company from Lancashire is making a Hermes-like foray into the Fringe. Burnley Youth Theater affiliated ‘Byteback Theatre‘ consist of seven 17-year-olds who came to together round a blank page as recently as May. They were given the challenge of creating theatre – to both entertain us & to teach us – & their hard-hitting result should be heartily praised. It not only matches most of the adult theatre in Edinburgh right now, & surpasses many, it is also filled with the liquid energy of youthful philosophizing which is starkly honest & simplified, & perfect for the theatre. In a recent interview with The Mumble, Byteback’s artistic director, Karen Metcalfe, describes the play;

Dead People Don’t Have Secrets follows the lives of four young people as they go into adulthood carrying a dark secret. Rumours, dares, and lies get out of hand and friendships turn sour. The lives of people around them are affected, and they must work through their guilt and shame to find justice, peace, or truth once their secrets come to a head. The show explores death, consequences, and lies through physical theatre, spoken word and new writing. The show was originally inspired by the title of a Death, Sex and Money podcast of the same name and we were fascinated about the secrets that people carry with them through their lives that may only come to light once they are dead. 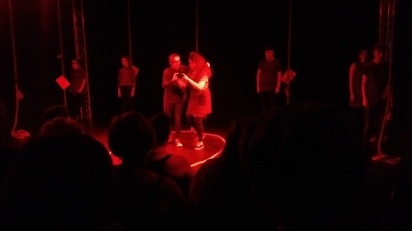 From such a cauldron-like creative process, Dead People… contains a number of different but highly defined elements; a futuristic set design, in which a noose forms the oratorial centre-stage; Shakespearean soliloquies in hip-hoppy couplets; physical theatre & its most animated & synchronised best; & of course that wonderful lingua franca of East Lancashire, which after the Tuscan dialect is the most beautiful assemblage & elocution of words on the European continent. Together, they tell with a delicate flow the story of ‘Pervy Peterson’, a school-ground dare & the devastating consequences for all. Byteback presented a powerful topic which could have fallen flat on its face, overdosing on the sickly pathos, but no, once the clever little time-shifts had been properly understood, Dead People… wove & maintained a tense & hypnotic spell over the audience until the powerful, again Shakespearean, finale. Excellent theatre on many levels, packed full of emotions & visceral harsheties, Dead People… is an amazing feat for such a young group, & offers much promise for the future, wherever their feet may tread.

Posted on August 9, 2017, in Uncategorized. Bookmark the permalink. Leave a comment.