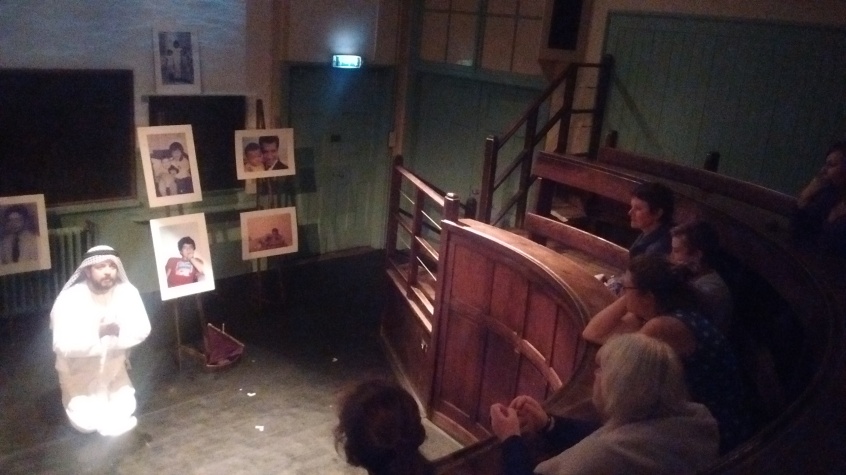 Taking seat as a reviewer at the Anatomy Theatre in the Summerhall, notebook in hand, is a throwback to the time it was once used to teach veterinary science to the students of this grand old institution. These days The Summerhall is Edinburgh’s leading artistic centre, I would say, & opens its doors to the world every Fringe; through which has just stepped Kamaal Hussain. Half-Iraqi & half-Canadian, this bubbly cherry-cheeked gentleman invited us into a whirlwind tour of his five decades upon this planet. Like a chryselephantine statue come to life, white robes streaming to his naked feet, Kamaal had complete command of his stances, & with his perfumed voice allured into his world.

Scheherazade was the vizier in 1001 nights, an obscure name in the west, where we are more happy to make the connection to Sinbad. So, to please us, Kamaal has loosely based his own life’s odyssey upon the voyages of Sinbad, serving up curious & brief interludes of that oriental tale between his own story like tree-lined boulevards between Parisian arrondissement. Yes, the main beef of this one-man play is a tour of Mr Hussain’s fascinating early life as a mixed race kid in the East Midlands. He was born in 1968, a time when true racial acceptance was an abnormality – it has taken the deaths of two generations to finally reach that place in these our modern times. Maybe that is why Kamaal is now ready to speak about his troubled youth, for today we the enlightened will only judge a piece of performance art for the pathos of the content, rather than the content itself. In an earlier interview with the Mumble, Kamaal described his creation as being…

…born out of need to tell the stories of Arabs in the West. In the light of the Gulf wars, the rise of Daesh and the seeming demonisation of the Middle East in the press, I had wanted to respond this theatrically. This production uses the Arabian Nights as its foundation, recognisable stories to a Western ear, but maybe over-adapted or bastardised in a Western context (think Aladdin). I decided to tell my life story, interwoven with the stories of Sinbad the Sailor, to examine my (and my family’s) particular relationship to migration from the Middle Eats to the West. And Becoming Sheherazade was born! 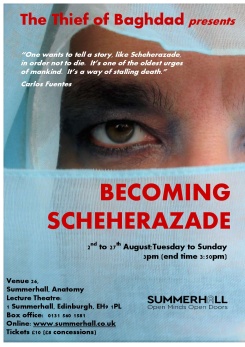 Becoming Scheherazade is accompanied by a series of excellent visual stimuli, which come in the form of photographs from his past, bordered in the same angel-white as the robes of our precious storyteller. These began as black rectangles, but as Kamaal leads us through his life, they would be turned & revealed & laid to rest all about him like speech bubbles in a comic strip. As the photographs appeared one-by-one they seemed to waft anticipatory breezes into the room.. where was this life going… what would be the denoument? And then it came, a bombshell of near perfect dramatic development, & from that moment I was hooked, as the gentle family monologue had become a symphonic soliloquy. The wasps were out of the hive, stinging, & the tears were set to flow.

Tenaciously enchanting, Becoming Scheherazade is an exceptional & moving example of the Storyteller’s Art, performed with satin & indestructible regality. At the end we also had the complete jigsaw aesthetic of Kamaal’s back-story; a hall of mirrored memories & a galley of glowing moments. Excellent stuff!

Posted on August 4, 2017, in Uncategorized. Bookmark the permalink. Leave a comment.