← Wind In The Willows
An Interview with Kamaal Hussain →

An Interview with Georgia Taylforth

Hello Georgia, so where ya from & where ya at, geographically speaking?
Hello! I’m originally from North London but have now found myself south of the River in South West. It doesn’t sound like that big a move but it’s completely different! I’ve been here for quite a few years now though, so I’m slowly starting to get used to it!

When did you first find yourself getting into the dramatic arts?
I honestly can’t remember. I come from a family quite involved in the arts so I guess I always have been. Two of my aunts are actresses and my mum is the most incredible drama teacher in the world. She set up her own drama club and over about 7 years, she flat out refused to increase fees, just because she didn’t want any of the kids to miss out. She’s amazing.

When did you first realise you could write for the stage?
Whilst training for GSA, I used to write small scenes in order to get out of having to give presentations. For our Comedia del Arte project, I wrote our group a pantomime instead! I then wrote a few small scenes for fundraisers for other companies, but it wasn’t until we’d graduated that I actually attempted writing a full length play. I’ll always have Ali (one of JunkBox) to thank for writing Mine. She told me I had to write her a play because she wasn’t getting seen for the parts she wanted, so I did. Touch wood, I haven’t looked back since.

Which playwrights have inspired you?
I’m inspired by so many different playwrights, it’s hard to just name a few. Jack Thorne’s “Bunny”, was one of my first monologue choices for Drama School and since then I’ve loved everything he’s done. Karla Crome is someone I look up to pretty much everyday as a Playwright and actor. Shaun Kitchener, again is someone who I think is brilliant. And without sounding like a broken record, my mum. She’s stopped writing now, but when I was younger she would have papers all over the table and floor trying to piece together scenes, and I would watch and marvel in how she did it.

What does Georgia Taylforth like to do when she’s not being theatrical?
I currently work in a gym so attending classes there is pretty high up the list. I’ve got a Shih Tzu called Dolly, who I’m very much in love with so spending time with her (and my boyfriend) is a bonus. JunkBox does take up a lot of my time though, because when we’re not thinking about Edinburgh, we’re organizing our scratch nights, “Scratch and See”. I’m lucky to have the company with my two best friends, so it hardly ever feels like work. 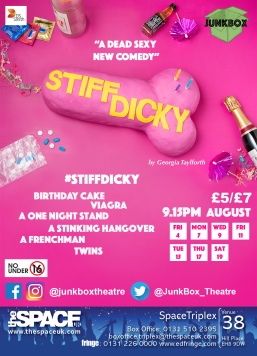 You will be bringing two plays to Edinburgh this August, Mime & Stiff Dicky. You wrote & are performing in both. How much of you is in the plays & in the parts you perform?
I’m very lucky with the company that the actors have helped me workshop both plays and create pieces that we feel very proud of. Because of that, I think there’s a bit of me in both plays, but there’s a bit of everyone in both. If a scene or section of dialogue didn’t necessarily work, we’d go back and work together to make it fit. With Emma (Mine) and Alice (Stiff Dicky), I think they’re exaggerated versions of me and my friends at different points of our lives. Both plays aren’t necessarily everyday life, but I think he reason that they have worked with audiences is because, the characters are. I hope that as soon as each character starts talking, you can relate to them in one way or another. I love playing both characters, but Alice has a very special place in my heart.

Can you sum up your two shows with a single sentence each?
Mine – Modern day pregnancy under the microscope, with Nutella.
Stiff Dicky – 45 minutes of dirty jokes about a dead man with an erection.

What emotive responses do you expect from your audience?
I never expect anything and that’s what I love about it. Mine splits audiences, some are angry, some cry, some laugh and some just come and hug me which is nice. Stiff Dicky is so much fun. We had an audience of pretty much just old people, and when a certain incedent happened with the erection and someones mouth, one of the old girls said rather loudly, “I’ve done that”, which was one of my favourite moments so far.

What does the rest of 2017 hold in store for Georgia Taylforth?
So much of 2016 has been focused on taking these plays to Edinburgh, it’ll be so strange to focus on a new JunkBox project. That being said, there’s two plays in the pipeline and I’m off to Australia towards the end of the year, so we’ll see what happens there!

Posted on July 16, 2017, in Uncategorized. Bookmark the permalink. 1 Comment.

← Wind In The Willows
An Interview with Kamaal Hussain →