An Interview with Glenn Chandler 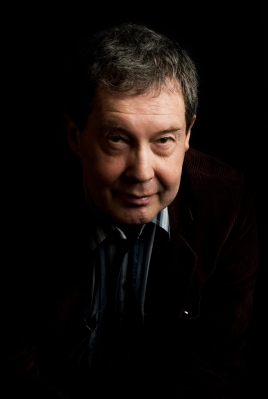 Hello Glenn, so where ya from & where ya at, geographically speaking?
I was born virtually on the slopes of Arthur’s Seat in Edinburgh, so doing the Fringe is very much coming home, with a brisk climb to the top every morning to keep myself sane for the day ahead.  I now live in Hertfordshire.  Contrary to popular belief, I never lived in Glasgow, and when writing Taggart had to immerse myself in a very different culture.  For an Edinburgh public school boy, that was quite terrifying at first!

When did you first find yourself getting into the dramatic arts?
Long before creating Taggart, in a universe far far away, I wrote a number of short plays for two London fringe theatres, but when TV came a-knocking I let it in and a Glasgow detective series was born.  While immensely grateful for everything TV did for me, about nine years ago I made the decision to go back into theatre, and not only write but produce – and ultimately direct – my own work.  It’s about taking control, taking risks, and doing the things you can’t do on television.

What for you makes a good piece of theatre?
Entertainment value.  Showmanship.  Imaginative staging.  Something that sends me out smiling rather than shaking my head.  And if it changes my perception of life and gives me something to think about all the better.  I saw a show last year on the Fringe which was an interplanetary adventure through space and time and it was performed with cardboard boxes and an ironing board as a rocket.  It was brilliant.  I love that sort of stuff.

When did you first realise you could write for the stage?
It was an extremely hot summer in London (1976) and I had a dull office job on Piccadilly.  One day I got chatting to the boy who operated the photocopier (they were huge machines in those days).  It turned out he worked as a rent boy on his lunch hour and he told me a few stories about his experiences.  I wrote a play about him and his mates and it was put on at the Little Theatre in St Martin’s Lane, which is now Stringfellows.  He came along and loved it, and I realised I loved writing for the stage.  I often wonder what happened to him.

You are a prolific writer for stage & screen, but what does Glenn Chandler like to do when he’s not being theatrical?
I love walking and hill-climbing.  My partner and I used to spend two weeks every year in the Highlands with a tent, camping rough, but the midges sadly had a policy of non-cooperation.  I enjoy astronomy – I have a ten inch reflector at home.  Family history is another great passion, I have traced my Chandlers back to 1575 in the New Forest where they were yeoman farmers.  My favourite discovery was that my grandfather was a bigamist, a fact I’m very grateful for.  If he hadn’t abandoned his first wife in London and come to Edinburgh where he met my grandmother, I would never have been born and would not be writing this.

Can you tell us about the transition from being a writer to being a producer?
It was a baptism of fire.  In 2008 I produced my first two shows in Edinburgh, one of which was my own Boys of the Empire.  It was a sell-out.  However, somebody forgot to tell me that as a producer you have to put up/find/steal/borrow the money.  You also have to look after actors, soothe their egos, deal with hundreds of little problems that come up daily, like the young actor who was constipated for two weeks, went to the doctor and got an emergency quick-acting laxative.  He was performing two shows each day.  I went out and bought the nappies.  Luckily, his relief came between shows, but it was nerve-racking for a while.  You think being a producer is glamorous? 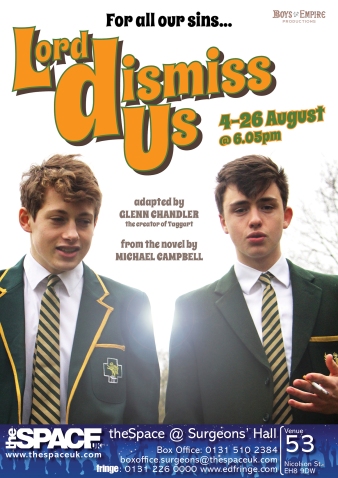 You will be bringing Michael Campbell’s novel, Lord Dismiss Us,  to life this August, can you tell us about the novel & the play?
I read the novel as a teenager (under the bedclothes) and it made a great impression on me.  Although I wasn’t aware of it at the time, it was a coming-out novel, all the more remarkable for the fact it was written in 1967.  As a gay teenager, who had gone through school and experienced some of the same emotions, I lapped up every page.  The play is the very first adaptation.  I have had to cut some characters and combine others  for reasons of time and economy, but the main protagonists are there and though I have had to tweak the story a bit I hope and believe I’ve stayed faithful to the spirit of the novel.

Do you feel a connection with Michael Campbell in any way?
Quite definitely.  He went to St Columba’s School in Dublin, which was his model for the sexually repressive Weatherhill School in the novel.  It is said that the suicide of a master there was the inspiration for one of the characters.  He lived for many years with his male lover, a publicity director for the firm of Heinemann who were his publishers.  When he died, he left the rights to Trinity College, Dublin, from where I bought the rights to adapt the novel for the Edinburgh Fringe.  I’d love to have met him and known more about his boyhood and schooldays, but even if half of Lord Dismiss Us is autobiographical, he was having rather an interesting time.  For the period.

What emotive responses do you expect from your audience?
Oh gosh.  I want them to laugh.  The novel is very, very funny and I hope the play is too.  The boys put on a school musical within the play which involves dressing up as girls, and there’s a passionate snog which raises the ire of the headmaster who tries to stop the show.  The result is mayhem.  But it’s a tragedy as well, and in the year that it’s set – 1967 – Parliament partially decriminalised the law on homosexuality.  Nevertheless, Terry, the hero of the novel, leaves school and will be a criminal until he is 21.  I want people to realise what life was like fifty years ago, to see how far we have come in half a century.  There are some powerful emotional storylines involving two boys in love, a master wrestling with his sexuality, treachery and betrayal.  Yup, I suppose I’m going for every emotion I can get.

What does the rest of 2017 hold in store for Glenn Chandler?
I want to climb a Scottish mountain.  Desperately!  A stiff breeze and no midges and a bottle of Islay malt.  Then think about what happens to Lord Dismiss Us.  I have plans, but nothing cast in concrete yet.

Posted on July 3, 2017, in Uncategorized. Bookmark the permalink. Leave a comment.