An Interview with Matthew Zajac

What for you makes a good piece of theatre?
Brilliant acting, a strong script which is unafraid to tackle the most challenging subjects, great theatrical ambition and synthesis of theatre disciplines and an absence of anything superfluous.  Everything which is on stage must be there for a reason.

What does Matthew Zajac like to do when he’s not being theatrical?
Climb hills, meet my friends and family, read and watch Inverness Caledonian Thistle.

You are a member of Dogstar Theatre  can you tell us about the company?
Dogstar has commissioned, produced and toured new plays for 18 years from its base in the Highlands.  It has built an international reputation, in spite of surviving for all that time on individual project grants.  The company is a dogstar with a bone.

Can you tell us about the transition from being an actor to being an artistic director?
I’ve been running companies for most of my 35 years in this business, so there wasn’t much of a transition.  Generating work myself and with colleagues is one of the main reasons I’ve managed to keep going as an actor. 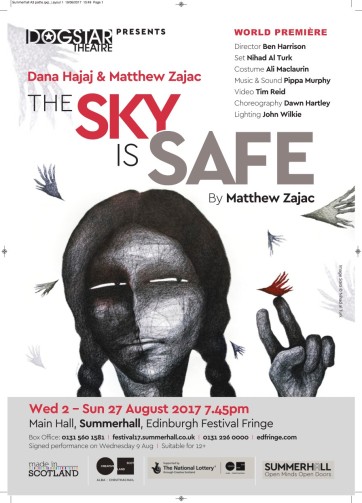 You will be bringing The Sky is Safe to Edinburgh this August, can you tell us about the play?
In 2012 I was stranded in Istanbul for nine days while I waited for an Iranian visa which eventually was refused due to my UK nationality.  This was during a period when diplomatic relations had broken down between iran and the UK.  I’d been due to go to Iran to play a role in a feature film.  I had a couple of interesting encounters on Istanbul’s streets and wrote about them.  Last year I was pondering a new project for Dogstar and remembered the Istanbul experience.  I learned that there were now around 350,000 Syrian refugees in the city and I decided to try to marry my earlier experience with that of Syrian women trying to make a life in the city.  In March this year, I returned to istanbul and, with the help of a local NGO, I had the great privilege of meeting and interviewing a number of Syrian women in their homes.  A lot of what Amal, the female character in The Sky Is Safe comes from these interviews.  She is essentially an everywoman, a composite character who embodies aspects of the female experience of the Syrian war.  The play is a two-hander, and I’ll be playing Gordon, a Scottish executive on a work assignment in Istanbul.  His business has some bearing on the war, so he represents aspects of the West’s relationship to Syria and the greater Middle East.  We are lucky to have a wonderful creative team on this show – Director Ben Harrison, who worked with me on The Tailor of Inverness and Factor 9, Composer Pippa Murphy, Video Designer Tim Reid, Costume Designer Ali Maclaurin, Choreographer Dawn Hartley and Lighting Designer John Wilkie.  The Set Designer is Nihad Al Turk, a highly respected Syrian visual artist who came with his family to Scotland from a refugee camp in Lebanon 16 months ago.  Our main publicity image is one of Nihad’s paintings.

In one sentence can you describe the experience of performing in Edinburgh in August?An exhausting and exhilirating whirlwind full of highs and sometimes lows.

What does the rest of 2017 hold in store for Matthew Zajac?
Resting, hoping for a successful outcome to Dogstar’s fourth attempt to get Regular (core) funding and for some interesting acting work where someone else is doing the producing etc., getting out into the hills, supporting ICT’s efforts to bounce straight back into the Premier League and writing.

Posted on June 28, 2017, in Uncategorized. Bookmark the permalink. Leave a comment.