← An Interview with Samson Hawkins
The Lyceum welcomes 70,000 Rooftop-Residing Bees →

An Interview with Christel Bartelse

Hello Christel, so where ya from & where ya at, Geographically speaking?

I’m from Toronto, Canada. I was born and raised in a smaller city, Kitchener, but no one really knows where that is, and I’ve lived in Toronto for 19 years, it’s home. My entire family, apart from my parents who moved here 40 years ago, is from Holland and they all live overseas. I’m married to a Welshman so all of his family will be travelling to see me in Edinburgh.

When did you first find yourself getting into the dramatic arts?

I was always a silly, creative kid growing up. I was always putting on voices, costumes, and playing characters for my older brother and for the neighbours. I loved putting on little skits in the basement. As I was growing up, I was in competitive dance (jazz, tap, ballet) and loved the stage. I wanted to act, but dancing was my life. In high school I started taking drama and loved it. And then at 19, realized I wasn’t going to be a professional dancer. My body ached and I was never super flexible so I pursued acting. In theatre school, I loved Shakespeare and the dramatics, but one Improv class in, I discovered my love of comedy and improvisation. A friend of mine and I formed a successful female sketch duo (The Burnt Marshmallows) and pursued that for 6 years, and then she moved away to Vancouver and I decided it was time to go solo, creating one woman shows.

What for you makes a good piece of theatre?

A good piece of theatre is a great story. It has to keep me interested and captivated, I want to think about it when I leave.  I want it to challenge me and provoke me. I love theatre that is beautifully staged and entertaining. An extra bonus is when it’s visually stunning. But I have also seen exceptional storytelling done on a bare stage. A captivating performer makes great theatre.

What does Christel Bartelse like to do when she’s not being theatrical?

It’s rare I turn it off;) When I’m not being theatrical I love hanging out with friends in good restaurants and pubs. Yoga, a lot of yoga, keeps me sane, I enjoy hanging with my husband, cycling, just being in the outdoors. In the Winter, when we don’t leave the house, I love catching up on films and Netflix.

You will be bringing All KIDding Aside to Edinburgh this August, can you tell us about the play?

All KIDding Aside is a comically honest exploration of my fears and hesitations around being a 30-something year-old woman wanting to hit the snooze button on my biological clock as it starts to tick…… It’s now decision time. This quintessential double bind faced by womankind sets the stage for an epic, hilarious “what if” battle of Parenthood v Career. My show takes place in a doctor’s office as I await my test results. My period is late. Am I pregnant? Or not pregnant? Riddled with indecision and anxiety, my show explores the pros and cons of having a baby and all of my fears surrounding it. This show is quite physical and I use a giant baby head mask to help tell the story.

How does it connect to your successful Oneymoon, are there emerging & continuous themes?

ONEymoon was about a woman who marries herself. After touring that show for years, I actually got married (to someone else, not myself!) All KIDding Aside is about the fear of having babies, but so far no babies… But I always create my shows based on strong themes going on in my life, so there are parallels in the way I created both shows. But in ONEymoon I play a heightened version of myself, playing my alter ego Caroline Bierman. Whereas in All KIDding Aside, it truly is my story. I’m being very honest and vulnerable and not hiding behind a character. But both of them have my quirky sense of humour. And they are both about “the self” and life choices. 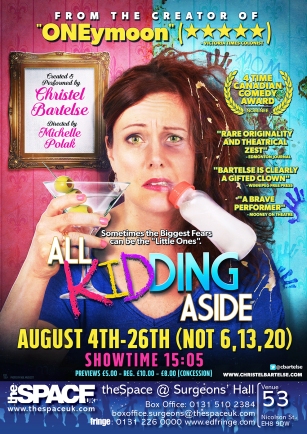 What is the difference between a Canadian audience & a Fringe audience?

The difference between a Canadian and Edinburgh Fringe audiences is that some Canadian audiences actually know who I am. Ha. Where as in Edinburgh, I’m a total nobody. But overall, the big difference between the Canadian Fringes and Edinburgh is that there isn’t much opportunity on the Canadian Circuit. Its rare big producers are coming out to see shows. You can’t really climb the ladder. It’s more about the quality of the art you produce and there is an ability to make a lot of money. But the biggest gain is really just wowing an audience, city to city. But that’s all you get, because there is no “next step”. Edinburgh at least provides more opportunity. There are people seeking out the “next show”. It’s no guarantee anything will happened, but it could. Also, for me I have to change some references in my show for UK audiences. Shoppers Drug Mart in one of our top pharmacy chains in Canada, but when I discuss this in my show, I now have to change it to Boots or another Chemist. Otherwise no one will know what I’m talking about.

What emotive responses do you expect from your audience?

I hope audiences feel joy after seeing my show, but also I’m okay if they feel confused, in perhaps their own life choices. They’re may also be some mild anger, or disbelief in one little sequence where I do try and surprise the audience. You basically get a wide range of emotions. It’s a trip.

In one sentence can you describe the experience of performing in Edinburgh in August?

The most intense month of my life, one filled with over one hundred emotions, and that’s just what I feel in one day.

What will Christel Bartelse be doing after the Fringe?

I’m sure after the Fringe I’ll be sleeping. There won’t be much of that in August.  But after some rest, I return to teaching in the Fall at Humber College and jumping into a new show that I’ll be creating. Essentially getting ready for and prepping the next tour

BARTELSE WILL BE PERFORMING HER SHOW

Posted on June 20, 2017, in Uncategorized. Bookmark the permalink. 1 Comment.

← An Interview with Samson Hawkins
The Lyceum welcomes 70,000 Rooftop-Residing Bees →