This tour of Jane Eyre for National theatre productions comes around with an entourage to match the titans. Starting in 2014 at the Bristol Old Vic it is a take on the story that delivers perhaps its most original meaning from Bronte that Sally Cookson, Director, was inspired by in the Orson Wells film noir version. The difference between the two is striking from the point of view of Jane Eyre. Wells distorted the idea behind the story making it instead a tinsel ride for Holly wood. Sally tells us that she thought of the tail as a life story rather than a love story which I think was correct from Bronte’s own point of view. 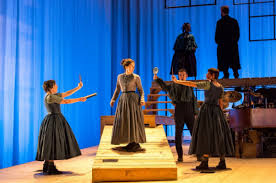 The epic quality to this play was set in plain sight in that we saw on the stage of perfect proportions a construction made of wooden levels and black metal ladders. This brought a curious feeling from the beginning. There were all sorts of theatrical nuances that played as pivotal a role as the music and costume, bringing with it a sense of theorising provoking thought. The production offered far more than collaboration instead looking to a group sense that played in the battle that shone with the light of Jane Eyre. The great leap from novel to play was made greater as the stage went beyond into the hearts of the characters.

Charlotte Bronte’s characters, who the group filtered for the stage, brought her droughts of admirable scenes particularly between Jane, played by Nadia Clifford, and Mr Rochester, played by Tim Delap, who converse about Jane and her position in his house. Jane’s story is the development of the play, which is as passionate as the book itself, her life as regarded by her and her early dealings with cruelty, and tragedy and each rung she would climb through with a strength that equality and justice deeply imbued in her as the story unfolded.

There was more than pushing of boundaries going on in this play, there was a creative urgency in almost every minute that Sally saw in the story and would passionately bring into her dedication to the cause of woman’s liberty at the end of the nineteenth century, here in a most harrowing way. Jane herself offers interludes of plain description during the evening, she talks with her colleagues in real time but is also followed by voices who debate what she is to do in her mind that was at times fragile, at times belligerent but always fair.

The representation part in this play was so intelligent, rich and fresh. In a complicated transaction from book to play on the surface planned immaculately and underneath allowed to grow as she did in pain, thought and above all action. There were bizarre moments that cut across the stage in the music and choreography, the stage brought to life in nineteenth century garb, they held a close scope to costumes so as to fit other ideas, as characters ran up and down the stage, shadows and silluetes as the stage darkened.

We could only imagine how Janes world would feel with her and the plays introductions she as orphaned as a baby, as an offering to her life. The ideas brought about in this play seem almost countless; visions arise as does life supported by the music band on stage and the various singing, melodies plucked from a pool of senses, and indifferent to Jane her own singing conscious that wore a red dress.

Visually this impact happened again and again, and deepened and was pulled back by loud appealing responses from Rochester who was perhaps Janes love that grew more passionate but again in her despair she was lost even after accomplishing so much.

Posted on June 8, 2017, in Uncategorized. Bookmark the permalink. Leave a comment.