← Daphne Oram’s Wonderful World of Sound
But That Was Then →

An Interview with Derek Crawford Munn

The Gilded Balloon and Kinbur Productions have revived Michael Burrell’s award winning one-man play, HESS, a poignant and haunting production that has stimulated, moved and provoked debate. A hit of the Edinburgh Festival Fringe 2016, directed by Kim Kinnie and ‘meticulously’ performed by Derek Crawford Munn, HESS has already played at Eden Court Theatre, Inverness, on 03 May and will hit The Tolbooth, Stirling on 20 May before it heads to the Prague Fringe from 26 May to 3 June 2017. The Mumble managed to catch MR Meticulous himself, Derek Crawford Munn, for a wee chat

Hello Derek, so where ya from & where ya at, geographically speaking?
I was born in Renfrewshire in the village of Inchinnan… although over the years I have lived in a few places around the UK, I’m now back in Renfrewshire near my family in Bridge of Weir.

When did you first feel the pull of the dramatic arts?
I’ve been ‘performing’ from an early age, in everything from school plays to local drama clubs. My first professional paying acting job was in 1988, which was closely followed by 3 years in The then Royal Scottish Academy of Music and Drama, and I’ve luckily been working in the industry since.

What for you makes a good piece of theatre?
I’m sure my answer to this question won’t be original, but good theatre for me is anything that completely engages an audience. Whether that be with laughter, tears or shocks. If you’re lucky enough to be either in or watching a great piece, the tell tale sign is the ‘pin drop’ moment, by that I mean the moment when both audience and cast are completely immersed in the experience.

What does Derek Crawford Munn like to do when he’s not being theatrical?
Hobbies? My dog I suppose, and a great love for travelling and exploring our beautiful country.

You are just about to take Michael Burrell’s HESS on the road. Can you tell us about the play?
HESS was originally performed by its writer Michael Burrell in 1976 at the Young Vic. The play is essentially the life of the Deputy Fuhrer. It also works on several levels as a comment on rehabilitation of the incarcerated, as a detailed description on the rise of the Third Reich, and finally but most importantly, a most timely and pertinent warning from history on the dangers of right wing extremism.

Hess was a complicated character, does that come out in the script?
Yes the complexity of his character is very evident throughout, and pretty much displays itself by both engaging the audience’s sympathy and it’s revulsion.

How did audiences respond when it was performed at last year’s Fringe?
The audience reaction at the fringe was pretty overwhelming. With almost everyone who saw the show being extremely complementary. Without question though, the best moment for me, was when I was visited by a gentleman in his 80’s, who had been a medical officer in the British guard contingent. Getting the compliment “You even caught his mannerisms” from a gentleman who had examined and actually spoken to HESS was a moment I won’t forget. 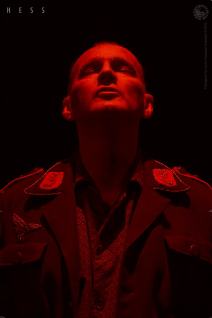 Does it not feel lonely up there, when you are doing a one-man show?
Not at all! In fact I don’t think I’ve ever been in a piece that engages with the audience as much as this one. If there’s any loneliness its during the rehearsal period, where there’s no-one to bounce off or even have a break and a coffee with.

You are just about to take Hess to the Prague Fringe, what’s the backstory?
No denying I’m hugely excited that I’m off to Prague for the festival there. There are many personal reasons I want the piece to do well there, not so much for my benefit, but for all those who surround it, and have been involved in getting us this far. As I said earlier, we sadly lost Michael in 2014, and considering the great success he had with it first time round, and of course his brilliant writing, I am very keen to give it as much exposure as possible, and that it should be the memorial to him it deserves to be.

What does the rest of 2017 hold in store for Derek Crawford Munn?
I’m hoping for more of the same really. At almost 60 years old I’m still pretty young in HESS terms, as he is in his eighties in the play, so it would be nice to think that I can tour the play for quite some time yet! And as any actor worth the name will always tell you, “this could be the one” So who knows, maybe you can interview me again in 20 years timE!

Posted on May 11, 2017, in Uncategorized. Bookmark the permalink. Leave a comment.

← Daphne Oram’s Wonderful World of Sound
But That Was Then →