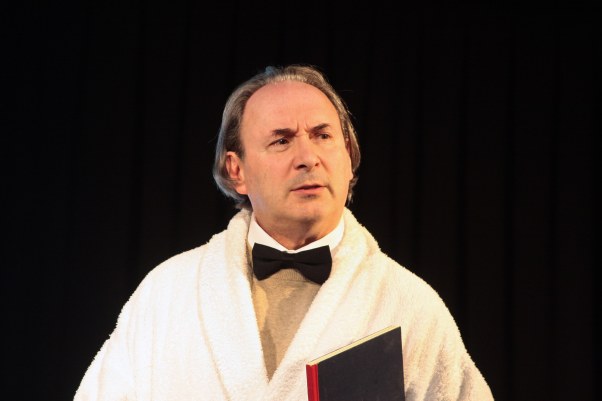 Channeling Jabez, written and presented by Giles Croft & directed by Liz Carruthers and assistant director David Wood, tells the story of the twenty-odd attempts by Glasgow born Jabez Wolffe (inspired by the feat of Captain Webb) to swim across the English Channel. These various efforts were thwarted by weather, tides, jellyfish and most spectacularly, World War I mines. The statistics for each and every endeavour is listed from the stage in the manner of a poor Reith lecture, complete with doubtful props. There is a guitar which Mr Croft admits then demonstrates, he can’t play, a map of the English Channel pinned with little Saltires and even a reluctant volunteer from the audience, asked to come forward and grease a manikin to channel swimming protocols.

Mr Croft is not a performer but has managed to memorise an impressive amount of channel swimming statistics (although he does lose his way at one point and has to ask the sound desk for a prompt). His retro costume of crewneck jumper and black bow tie is inspired by the grainy film footage of his hero shown at the end of the show which finishes with a piece of slapstick business that smacks of desperation. Not exactly theatre, this was more of a multi-media story-telling session, a format which can be entertaining but in this instance struggled to amuse.

Posted on April 5, 2017, in Uncategorized. Bookmark the permalink. Leave a comment.