The Lyceum @ the EIF

The Royal Lyceum Theatre Edinburgh is delighted to join together with Edinburgh International Festival and DOT Theatre of Istanbul, one of Turkey’s most radical independent theatre companies, for an enthralling new Scottish/Turkish interpretation of avant-garde playwright Ionesco’s Rhinoceros. The production is presented in a new version, written by leading Scottish playwright Zinnie Harris (This Restless House, winner of Best New Play at the Critics Awards for Theatre in Scotland 2016, and shortlisted for the Susan Smith Blackburn Prize; How to Hold Your Breath, winner of the Berwin Lee Award 2015), who is currently in rehearsals for The Lyceum’s production of Caryl Churchill’s A Number, starring Peter Forbes and Brian Ferguson and performed as part of the Edinburgh International Science Festival from 6 – 15 April 2017. 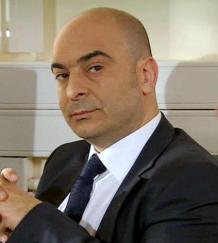 Rhinoceros is directed by the celebrated founder of DOT Theatre, Murat Daltaban, and performed by a diverse company of actors from Scotland and Turkey. DOT Theatre return to Edinburgh International Festival following their incredible presentation of Theatre Uncut Istanbul, a project bringing leading Turkish writers together with leading UK writers to respond to the Gezi Park occupation and protests in Taksim Square, again directed by Murat Daltaban and presented at the Traverse Theatre in 2014.

In a sleepy French provincial town, a rhinoceros rampages across the market square. Another crushes someone’s cat. A woman sounds the alarm: it is the townspeople themselves who are transforming into these raging beasts. As more and more of the citizens embrace their future as rhinos, just one man – the drunkard Bérenger – refuses to transform. But why does he feel so out of step with everyone else? And what will his refusal to conform cost him?

Eugène Ionesco’s classic 1959 play is an uproarious absurdist farce – and a chilling examination of conformism, nationalism, fascism and fundamentalism that has been compared with Orwell’s Animal Farm and Camus’s The Plague. It considers the countless ways in which humans are content to adapt themselves to new and horrifying circumstances, and give in to poisonous ideologies. Alongside its piercing political insights, it is comic, thrillingly theatrical and deeply human, focusing on the unlikely hero of the everyman Bérenger, and the possibility of resistance to what might seem inevitable. A historic capital city from the far south-east of Europe collaborates with another historic capital in Europe’s far north-west to create a show that speaks urgently to the whole continent, and beyond.

Speaking of her adaptation, playwright Zinnie Harris says: “I think Ioenesco’s Rhinoceros is an immensely powerful and pertinent play for our times, if not a crucial play. It talks about mass movements, political discourse and how difficult it is to stand against a crowd – particularly one that is changing fast. The play is hilarious in places, witty and absurd – we are invited to laugh at the ridiculousness of the situation before we recognise ourselves. When David Grieg and I first started talking about this project, it felt important that is should have an international team behind it, as this play speaks to so many regions of the world in 2017, so it is very exciting that we are able to work with the brilliant Turkish theatre director Murat Daltaban and his team from Dot Theatre in Istanbul. Murat is a dynamic and imaginative director that will a wonderful aesthetic and heart to the production.”

Director Murat Daltaban says: “The destruction becomes a sound in Rhinoceros. It arrives with a sound. It infects people with a sound. It insidiously alters the world with a sound. The masses cheer when that sound grows louder. The sound makes the individual deaf to the others and it isolates them. When the sound moves beyond the boundaries, one cannot hear one’s own voice anymore. All forms of communication, the sound destructs it all… This world, with all its “noises”, takes over our limbs and paralyses the time and space we are in. In this uncanny world, we must try to hear each other out, without succumbing to the fear it spreads.”

Fergus Linehan, Edinburgh International Festival Director says: “The International Festival has had a working relationship with The Lyceum, one of our core Festival venues, for many years and I’m delighted that this develops in 2017 with our co-production of Rhinoceros. Part of a special season for our 70th anniversary which sees four Scottish theatre companies consider the origins of European drama from a contemporary perspective, Rhinoceros brings together Scottish writer Zinnie Harris with one of Turkey’s most radical independent theatre companies, in a show that I’m sure will speak to the whole continent and beyond”

Exploring the themes of conformity, culture, and morality, Eugène Ionesco said in an interview in Le Monde (January 17, 1960): “I have been very much struck by what one might call the current of opinion, by its rapid evolution, its power of contagion, which is that of a real epidemic. People allow themselves suddenly to be invaded by a new religion, a doctrine, a fanaticism…At such moments we witness a veritable mental mutation. I don’t know if you have noticed it, but when people no longer share your opinions, when you can no longer make yourself understood by them, one has the impression of being confronted with monsters – rhinos, for example. They have that mixture of candour and ferocity. They would kill you with the best of consciences.”

Rhinoceros is at The Lyceum from Thursday 3 – 12 August 2017 as part of Edinburgh International Festival, and again in spring 2018 as part of David Greig’s second season as Artistic Director of the theatre.