← Dirt Under The Carpet
An Interview with Muireann Kelly → 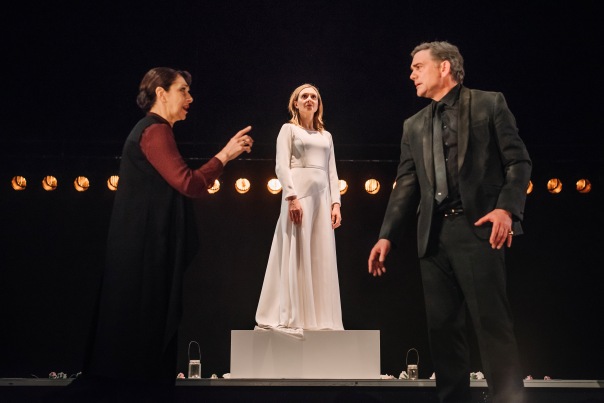 The Winter’s Tale is one of Shakespeare’s later plays, a tale of sexual suspicion & abandoned babies set in Sicily & the Bohemian foothills of central Europe. Of its place in the Shakesperean canon, the Lyceum’s commander-in-chief, David Greig, told The Mumble, ‘I love ‘late style,’ the work an artist does at the end of their career, whether it’s the deep melancholy of Beethoven’s late quartets, David Bowie’s final burst of reflection & exploration, or Rembrandt’s last self-portraits. ‘Late style’happens when a great artist begins to take down the scaffolding they’ve spent a lifetime building around their work &, instead, simply, lets the art stand.’ Of the play itself, Greig added that it was something he returned to, ‘again & again because its heart is an ache & a faith. An ache for redemption & a faith in spring… a yearning which can surely speak to all of us, no matter what stage of life we find ourselves.’

To interpret well for the modern stage the peculiar & monstrously unfathomable genius that is William Shakespeare is the touchstone against which all noble-minded directors & producers must test themselves.Whether lauded or laughed at, when it comes to Shakespeare the watching public, especially the British, sit in their seats with daggers drawn like intoxicated hashassins, puffing their perfumed opium, waiting to strike. So precarious is the artistic license, that one false step will have those poison-barb’d daggertips hurtling at the company before even the curtains come down.

The Lyceum’s Winter’s Tale, then, is a game of two halves The first is brilliant; glossy & well-acted, its the purist’s dream – where modern touches such as mobile phones, christmas jumpers & the DNA test/Delphic oracle are lovely little nuances. John Michie as Leontes was particularly consummate in his role, striding onto the soliloquy’s senate floor with breath-taking, silence-stalking confidence. His playing was matched by Maureen Beattie’s highly believable Paulina & also David Carnie’s wee Mamillius, from whose charming lilt & gallant focus it seemed as if the cherub-faced boy-actors of the St Paul’s Troupe were playing among us once more.

The first half ended with the Bard’s most famous stage direction : ‘Exit, pursued by a bear’ – & it was done superbly, a real credit to the production team. Down went the curtain & I wandered into the busy half-time hub-hub with my appetite royally whetted for an equally distinguished second half. Not long into this half – about ten minutes – I began to feel that somebody had spiked my interval drink with ayahuasca or some other natural hallucinogen of the Amazonian Rain Forest.The actors were now speaking giddily in broad Scots, the colours grown quite overgaudy & the dramaturgy had transmorphed into a gala fete in Fife. Yes, Shakespeare intended a mood-shift, but I do not believe he ever meant it to be so overwhelmingly drastic!

Did it work, for some perhaps, for myself less so. After such an astonishingly sublime first half, the spell of mercurial fancy had been rudely broken & my imagination left reeling like a sidewinder in the sands. This production of The Winter’s Tale is a hybrid, not quite a mighty gryphon with the body of a lion & the wings of an eagle, but more a hyperactive spaniel with the wings, downy feathers & penetrating eyes of a beautiful swan. By the play’s denoument things had actually settled down somewhat, & the play reverted to its early brilliance, perhaps the ayahuasca had worn-off, who knows, but this play – for various reasons – should live long in my memory, which is the real raison d’etre, is it not, of the theatrical tradition!

Posted on February 16, 2017, in Uncategorized. Bookmark the permalink. Leave a comment.

← Dirt Under The Carpet
An Interview with Muireann Kelly →