← The Diary of Anne Frank
Dirt Under The Carpet →

In John Byrnes second part of The Slab Boys Trilogy Phil and Spanky have escaped the dire monotony of  A. F. Stobo & Co. Carpet Factory in Paisley and are heading to the annual staff dance. 1950s industrial Scotland and all that entails have been shoved under the carpet for a night out, even Phil losing his job and his hope of getting into art school are all waylaid for a night on the tiles. Directed by Caroline Paterson (Ruth Fowler,Eastenders) superb spot on lighting by Grant Anderson this fiasco is funny, slick, sharp-witted and surprisingly contemporary for being set over sixty years ago.

On arrival, I was greeted by the female staff all in 50’s outfits with freshly sprayed quiffs and made up faces.Quite a sight.In the foyer the rockabilly, rock’n’roll and r’n’b band Cutting A Rug comprising of Chris Harvey on vocals and guitar, Raymie McCabe drums and Davie Currie on double bass were giving it laldie and the awaiting punters were lapping it up while supping their pre-theatre drinks. 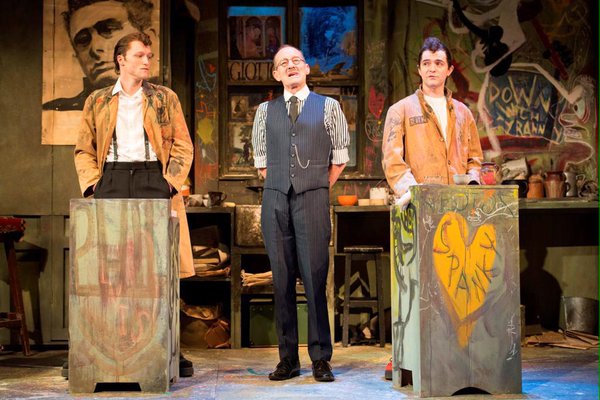 The old footage from cinemas of that era was comical and the fascination that Glasgow had with all things American was evident in the Elvis idolatry, the brylcreem and the soft top convertibles, albeit with a puddle or two on the upholstery in the back. The main characters Lucille and Bernadette are hysterically entertaining with their two faced attitudes and penchant for American cocktails that stumps the bartenders and Hector in his oversized suit aiming to impress Lucille.

Bernadette’s sharp tongue cuts Phil McCann down to size when he tries to chat her up .The way this play has been wrote where the characters tell you their innermost private thoughts prefight or post punch is insightful and absurdly amusing. Aldus Huxley is given a few different careers thanks to the ignorance of the characters .The character that stole the show for me was Sadie , the factory tea lady who took no prisoners especially reveling in noising up old Mrs. Walkinshaw, ‘ from the terrace hooses.’ A highly recommended riotous romp with laughs abounding, this peek into a bygone era will warm the cockles of your heart.

Posted on February 13, 2017, in Uncategorized. Bookmark the permalink. Leave a comment.

← The Diary of Anne Frank
Dirt Under The Carpet →