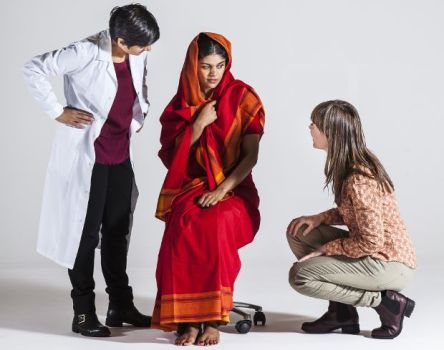 ‘The surrogate is only a carrier, you are renting a womb’

When we found ourselves sitting down at the play, one may ask oneself, ‘what am I actually here for?‘ A story, of course, well told, but we can get that from a good book. What the theatre does offer is the ability to witness character development & interactions at first hand, & it is in a play such as Made in India that these dramatical evolutions take centre stage. Of its inception, in an earlier interview playwright Satinder Chohan told the Mumble, ‘I was applying for the Adopt A Playwright award and was inspired by a shocking article about a white middle class English woman who paid an Indian village surrogate to birth her baby. (My play!) The woman described her surrogate as a ‘vessel’. With my Indian village roots, the surrogate could have been any number of my female relatives or if my parents hadn’t emigrated to the UK, even me. The story was loaded with so much conflicting emotion, culture and politics, I knew I had to write a play around the situation, to explore and understand its fertile terrain. I submitted the idea, won the award, began writing the play.‘ 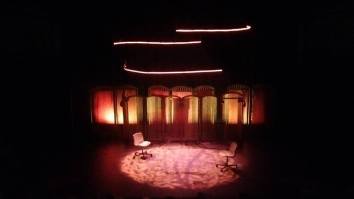 Made in India has three characters; the poor, womb-healthy, pregnancy-sweet-spot-hitting 28 year old from a Gujurati village, the female doctor at her own clinic & the desperate 40-something British  down to her last few eggs. Together they form a menage a trois which begins chirpily enough & ends with great drama. The entire backdrop of Indian surrogacy is painted with great detail, but never obstrusively into what is an excellently conceived, written & ultimately performed piece of theatre. 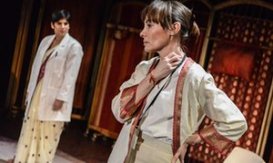 All three actress pull of highly believable portraits, while the stagecraft is sublimely effective – a combination of light changes & screen-shuffles enabling us to really place ourselves in steamingly hot India. The colours are all deep purples & gold, like the feathery tail of a peacock wafting before our eyes. The script is also littered with Indian touches, like lassi-cravings & the showbiz nature of Indian politics. Made In India is also a story of obsession played with a nervous brilliance by Gina Isaac. Her character Eva is so determined to produce a baby with  her dead husband’s sperm, that all around her are sucked in the maelstorm. This play is a rare thing in today’s theatrical landscape – for it teaches without being didactic, & entertains without slapping the drama on with a thick butter-knife. Well done to all concerned.

Made in India is in Scotland for another week or so

Posted on February 10, 2017, in Uncategorized. Bookmark the permalink. Leave a comment.