to the 5th November

Thirsty pigs Viv, Coco and Lacey are unwittingly in transit to the slaughterhouse. Viv, a cross-bearing, praying pig (surreal indeed) is trying to make the journey easier for all concerned, but Coco (Claire Cage) is rightly suspicious. From the back of the lorry  we are subjected to an animal rights play that would make eating your lunchtime pie – glad I chose quiche – a tad hard to swallow.

As was this week’s Oran Mor play. To a less than packed out theatre we encounter non-conformist Coco, more of a sow-preferring pig than a hog-chaser with her faux punk look. At least she wants to escape unlike Viv (Sally Reid), whose solution to everything is to kneel down and burst into prayer. Dippy Lacey (Michele Gallagher) can’t see beyond herself and is a sandwich short of a picnic anyway so we can’t really relate to her and her aspiring pig/actress role —– ‘ petrified porker….the trotter awards wait for no pig.’ 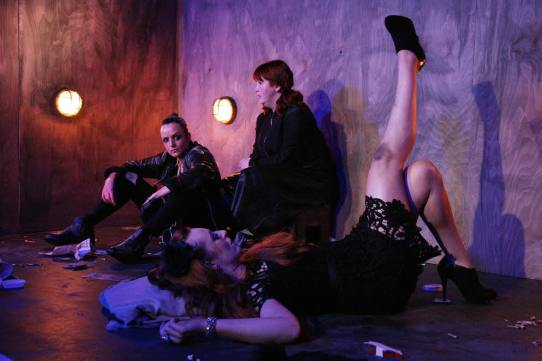 This questionable comedy by Kelly Jones examines why we slaughter animals for food and clothing and questions the ethics in doing so. This is a subject with zero humour, let’s face it – we like our meat to remain tasty with no reminders of the trauma the animals went through. Despite knowing that the actresses were doing the best they could and did manage to raise a smile a few times , the whole sad tail (pig body part thrown in just to show you how annoying the pig humour was and not a typo ) was a chore and I wouldn’t recommend it, sorry.

Posted on November 1, 2016, in Uncategorized. Bookmark the permalink. Leave a comment.