← An Interview with Laura Pasetti
Breaking the Ice →

The Rise and Inevitable Fall of Lucas Petit 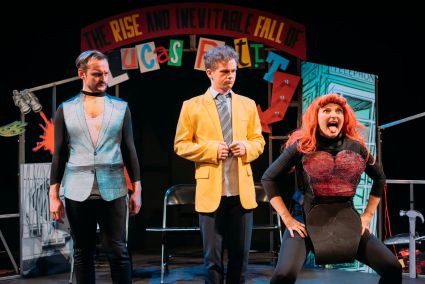 The Faustian pact is a well trodden road in theatre and art in general but, as a subject I have particular interest in, I am always willing to see a new interpretation. Here we have an ordinary bloke being lead astray by a camp jakey who may or may not be the Great All Mighty. It begins in a light enough vain, instantly recalling the Peter Cook / Dudley Moore classic Bedazzled (thankfully not the awful remake). The music is strong melodically and intelligent, recalling a burlesque or dance-hall feel with a contemporary twist, and the set design is as irreverent as it is creative. Set becoming props, props becoming costumes, all in a superbly imagined 2D cartoon style. So all in all the play is an audio and visual treat (and a particular mention must go to Nicola Sturgeon’s superb cameo). As for the plot we are soon launched into a fast paced adventure and barely have time to breath before our protagonist begins his dark descent. The interesting twist is that it’s God, not the other guy, who’s doing the corrupting this time. Apparently sick of Beelzebub having all the fun.

As the play continues it is fairly evident that the writer has teeth and doesn’t seem to think a great deal of this every man who has been caught up in this divine dual. Every hope of redemption seemingly dashed. The Lego Movie this ain’t. However the cruel wind it blows is a refreshing change from the tepid breeze of many modern productions trying too hard to please. Some of the gags can be a little obvious at times, local and cultural references thrown in all too frequently for a cheap laugh, but over all the writing remains witty and brutally insightful. Though I didn’t agree with many of the stances took by the play and found the comedy a little bit heavy handed at times (not averse as I am to the occasional tepid breeze), with the right audience this play would, and did the night I was there, go down a storm. So if you like your comedy to reassure you that everything’s all right, Lucas Petit might be worth avoiding, but if you’d prefer something with a little more bite then I suggest you seek it out in a town near you.

Posted on September 24, 2016, in Uncategorized. Bookmark the permalink. Leave a comment.

← An Interview with Laura Pasetti
Breaking the Ice →