← Behind the Barrier
The Letter → 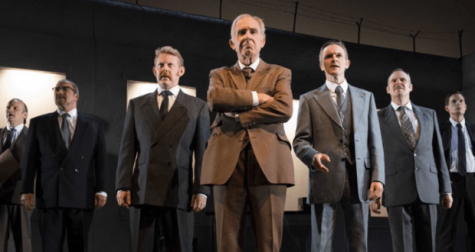 Rapture Theatre Company, proud to be Scottish, have adapted Shakespeare’s Hamlet to a contemporary Glaswegian backdrop and worked with John Byrne – our contemporary Shakespeare – on his adaptation of Checkhov’s Uncle Vanya which Byrne titled Uncle Varick set in 1960’s Scotland. With an intriguing backlog  I was excited and intrigued to be reviewing this rehash of the 2003 play Democracy written by Michael Frayn. Better known for his intelligent books The Tin Men (1965), The Russian Interpreter (1966)and Sweet Dreams(1973) Frayn, now in his eighties, has had flops and triumphs in his forays into theatre, Noises Off (1982) being his most acclaimed to date. 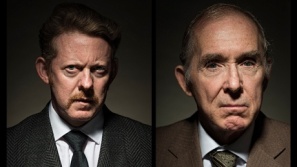 This slice of cold war espionage did not hook me in due to the banality of the acting and the monotony of costume. Ten white men in suits, all with impressive film and tv credits, struggled to keep the audiences attention. The long drawn out acts found the woman in the row in front of me falling asleep over two seats and I struggled hard not to follow in her footsteps. The problem here was the fact that I couldn’t empathise with the Stasi mole Gunther Guillaume (Neil Caple) who was in pursuit of his dry boss Chancellor Willy Brandt (Tom Hodgkins). The elusive Mischa that sent the workers into a state of fear didn’t work for me either , though that was entirely due to the fact that my dog shares that name.

Director Michael Emans’ regurgitation of  Michael Blakemore’s slick premier at The National Theatre in 2003 really is not worth the stamina needed to stay engaged. The colour of the evening was provided by the stage lights and the much needed interval. I’d give this a body-swerve if I were you.

Posted on September 10, 2016, in Uncategorized. Bookmark the permalink. Leave a comment.

← Behind the Barrier
The Letter →