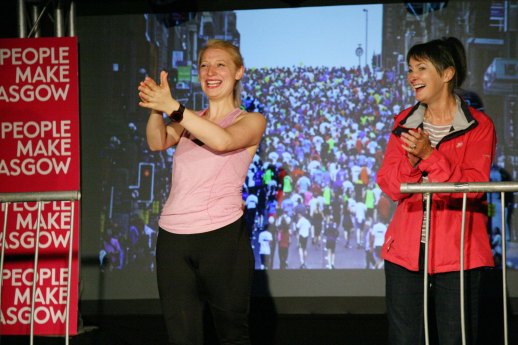 Behind the Barrier is a meeting of two Scottish broadcasting heavyweights – & when the peroxide mind of Muriel Gray meets the dramaturgical ninja that is Morag Fullerton, then we should expect a production of some quality. Luckily, they did not disappoint, & as we stand behind the barrier watching two women watch spectating at a marathon, we enter a curious yet poignant world. Gray’s wit seeps out of every second line, but the retrospective scenes offer a completely different avatar of her genius. Julie & Pat are the two women; Julie a middle-age mother of three whose husband is running the marathon – somewhere between the Kenyans & the fancy dress, but definitely after the club runners – while Pat is a sporty young un.’ 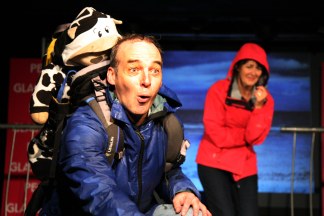 Each actress was excellent in her part, but I did notice a lack of chemistry between them on stage, which was this play’s only drawback. Otherwise, it is an excellent hour of theatrical entertainment – a parallelian play which keeps leaping about thro’ time, but not confusingly,  for there is a deftness to the timing of each leap. Gray’s chit-chatty comedy is brilliant throughout; bang-on at times – kids are only useful these days for changing fonts – cheeky at times, as when she described a ‘Pompeii in your pants,’ & her overall take on the situational play – stuck in a lift, soldiers in a trench kinda vibe – is refreshing. Yeah, a great start to this season’s PPP.

Posted on September 7, 2016, in Uncategorized. Bookmark the permalink. Leave a comment.