← Agent of Influence: The Secret Life of Pamela More
The View from Castle Rock →

Anything That Gives Off Light 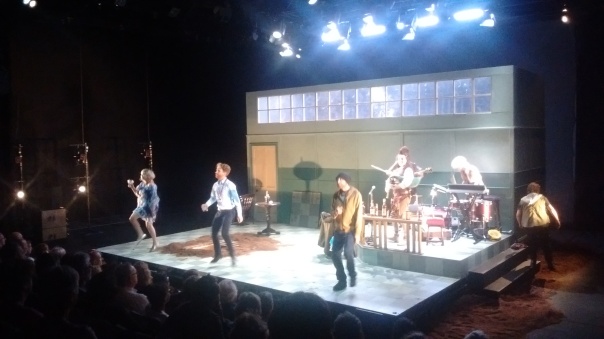 A strange play this one, a half-breed born out of a cross-oceanic dramaturgical bonding session. On one side we have the Scots, & the other their diasporan descendants amidst the Appalachian mountains of Virginia. Of its conception, Bob Leonard, chair of the MFA directing & public dialogue programme at Virginia Tech, told the Mumble how Rachel Chavkin, artistic director of TEAM,’played me like a trout in a stream, enticing me with the company’s desire to speak to present-day descendants of the Scottish diaspora about the cultural legacies of their heritage & how they understand the principles of democracy in terms of their own lives in the ridges & valleys of Appalachia. I was hooked.

Their creation is a strange one. Chuck all the stereotypes cliches about Scotland in a bucket & draw them out one-by-one to be discussed systematically by a couple of Scottish lads & an American woman (Jessica Almasy). Where the lads especially had some chemistry, the woman had talent, so as a watch it wasn’t too bad. Add to this some pretty talented, punk-looking musicians & some neat stagecraft & you’ve pretty much got the picture. Funny at times, like having a brillo-pad brushed roughly against your brain at others, the overwhelming feeling I got from watching the play was, ‘why did you bother?’ An unintervaled hour & an half of my life that I will never get back.

Posted on August 30, 2016, in Uncategorized. Bookmark the permalink. Leave a comment.

← Agent of Influence: The Secret Life of Pamela More
The View from Castle Rock →