← Competition : The Cheviot, the Stag and the Black, Black Oil
All The Best Reviews →

Twenty years ago, in New York of course, the 24 Hour Play was born. Write it overnight, give it to an energy-bubbling bunch of actors, perform it the next night. Twenty years later, Edinburgh-­based Asylon Theatre took up the challenge, with five sterling mini-troupes filling in the gaps. Who would win first place in the pan-Olympian Games – judged by industry experts –  & get to develop their play further… only two hours of riveting, unpusillanimous theatre will tell. Asylon’s artistic director and project producer Marta Mari, was MC for the evening, & you could really feel her love for the project trampolining from the introductions.

Trade Off by Diane Stewart

The five plays were short, snappy, tri-acted affairs; we had the Orson-Wellsian  ‘Community’ which rejected a superfluous ‘knobber’ from their ranks, we had the Female top-brass in the war against men battling with the idea of castrating their prisoners, we had the young lass & older mother-figure debating do with a wounded assassin, & we had the clown who had misread a poem & turned up at a suffragette meeting by mistake. That same poem, by the way, had been given to each of these playlet’s authors the previous nigght, the product of the Polish poetess, Wislawa Szymborska.

Some people flee some other people.
In some country under a sun
and some clouds.

They abandon something like all they’ve got,
sown fields, some chickens, dogs,
mirrors in which fire now preens.

Their shoulders bear pitchers and bundles.
The emptier they get, the heavier they grow.

Some invisibility would come in handy,
some grayish stoniness,
or, better yet, some nonexistence
for a shorter or a longer while.

Something else will happen, only where and what.
Someone will come at them, only when and who,
in how many shapes, with what intentions.
If he has a choice,
maybe he won’t be the enemy
and will let them live some sort of life. 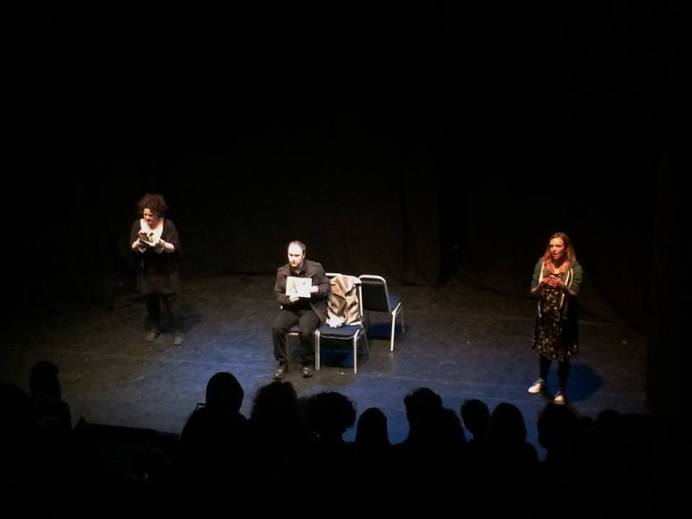 Pieces of Colour by Lisa VillaMil

The winning piece of theater, as if they were a modern-day Aeschylus or Euripides victorious at the Festival of Dionysis, was Pieces of Colour by Lisa Villamil. When they came out, the three characters seemed to be talking as if they were on their own – talking over each other as three separate entities – but each shared a suffering, that of an absence of identity amidst the world. We were presented with the Invisible Girl (Katrina Bryan), an outcast & misunderstood visionary (Philip Kingscott,) & the tortured ‘beast,’ an angry, world-hating & equally misunderstood, child-estranged mother (Isidora Bouziouri). As eventually came their interactions, there sprung a primeval community – well, apart from the ‘beast’ who we will perhaps see more of the when the play is further developed. Only time will tell.

Posted on July 5, 2016, in Uncategorized. Bookmark the permalink. Leave a comment.

← Competition : The Cheviot, the Stag and the Black, Black Oil
All The Best Reviews →