The Love I Feel Is Red

Mona (Janet Etuk) is a late 20s mentally strong athlete who dislikes her tragically departed boyfriend Ty’s mother Susan (Heather William) and has a personality to be proud of, saying what she thinks no matter what. Writer Sabrina Mahfouz explores abortion, miscarriage, a woman’s right to choose her path and the subsequent raw emotion experienced as a result of these decisions.

Descriptions are graphic, shocking but very real. I found myself feeling for Susan who is performed with such poignant believability as a mother who has lost her son and, ‘ grandson, I know its’s a boy ’ within weeks of each other. 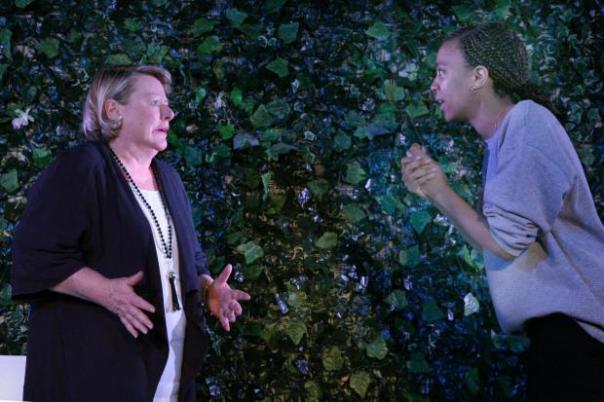 Is it her grandson or is it as Mona believes just, ‘cells ’ ? Deep, dark issues described so brilliantly by Mona in rapper type dialogue that firmly contemporises a topic that has been raging for centuries – whether medieval toxic herbs or two bitter pills – women still don’t get it easy if they chose to terminate a pregnancy.Although I ( and likely many sitting in the audience) could’ve done without the the graphic descriptions, knowing all too well what a miscarriage does emotionally and physically to a woman’s mind and body, there are many who don’t and this play is educational in that respect and therefor important.

There are no winners in this woeful play. Susan is left bereft as a woman who gave up so much of her own glowing career for her child, now gone. Mona, has to move on without her boyfriend, just her memories both good and bad and an instinctive will to not just survive but to thrive which we know in time she will. Directed by Nel Crouch and produced in association with Tobacco Factory Theatre this is worth seeing because the script and acting couldn’t be better in such a harrowing set of circumstances.

Posted on May 10, 2016, in Uncategorized. Bookmark the permalink. Leave a comment.