← Bob (the tragic hero time forgot)
I Am Thomas → 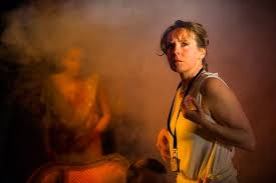 Glasgow based coups de theatre and stage crafter extraordinaire David Leddy (who earned the first Scottish practiced based PHD in theatre) is here directing his new multi-faceted production International Waters at the the much loved Tron. Lucky us! A magnificent set design inspired by architects Gehry, De Meuron and Herzog intrigues the audience with its rusty corrugated and mesh triangular components which float above and pave the way for the unraveling of the characters once we see through their superficial gloss.

Cyborg finance, the new cy fi using algorithmic or blackbox trading : essentially systems used by investment banks and pension funds, devoid of human control creates opportunities for malicious acts of cyber terrorism. The accidental glitch in these algorithms which caused the all too real 2010 flash crash or more commonly termed trillion dollar crash is a source of theatrical exploration for Leddy. So is Ronald Wright’s term, ‘progress trap’ and his recent rephrasing of of Marx, ‘each time history repeats itself the price goes up.’ Couple this with Leddy’s interest in philosophers such as Edmunde Burke and his love of the Romantic poets’ notion of the ‘sublime’ and you have a sense of what to expect from this prolific playwright.

Leddy’s characters are named from the passenger list of the Mary Celeste : Sarah Cobb(Claire Dargo) Ben Spooner- actually a bible bashing part owner of the Mary Celeste (Robin Laing), Sophia Briggs (Selina Boyack) and Arian Martins (Lesley Hart) have all paid through the nose for a ticket in the Calliban suite on a ship that reaches a very different destination than the one they thought they were paying for.

If you like puzzles, light farce with deep undercurrents of obsessional neurotic behaviour, ‘isn’t human psychology fascinating?’ then this one is a goer! Sounds are both terrifying with the pumped up volume of a ‘ringing hull of an empty super tanker’ and sublime, ‘Arvo Part’s delicate choral music and Appalachian a cappella gospel.’

There are references to Satre’s No Way Out,Herman Melville’s Moby-Dick, and Shakespeare’s The Tempest – but International Waters plot isn’t a retelling of any of them, just an additional layer of entertainment if you recognise these as they appear. David explains, “It’s something I come back to again and again … For me it goes back to Julia Kristeva’s original description of what intertext does, which is that it increases the level of resonance in the text because it’s not just the text itself, it’s the other texts that it’s referring to, so you’re borrowing a little bit of their emotional power. I like the fact that if you recognise the reference then that little emotional jolt is added, and if you don’t it should still work. That’s the challenge – creating something where if somebody understood absolutely none of the quotations it would still make sense.”

My head sure was messed with! Money, murder, bribery, corruption, seduction, wealth inequality, greed, narcissism,hijacking, drug addiction and misplaced naivety, the refugee crises, new utopias, racial tension and fear. Just some of the themes ricocheting around the Calliban suite with a Life of Pi overtone and a lot of bodily fluids… all executed by an uproarious cast who make us laugh at the most evilest 21st century capitalist avarice.

Posted on March 24, 2016, in Uncategorized. Bookmark the permalink. Leave a comment.

← Bob (the tragic hero time forgot)
I Am Thomas →