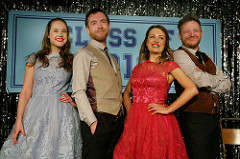 Prom, written by Oliver Emanuel and directed by Gareth Nicholls takes us back in time from the future to the class of 2016’s eventful and dramatic Prom Night. Four nameless characters, two male, two female, reminisce about what led up to that fateful night, which has obviously had an enduring effect on their lives.

Ably acted, with some good original songs and dance thrown in, Ryan Fletcher, Helen McKay, Martin McBride and Nicola Roy initially fire some good comic lines back and forth, with a near- capacity audience appreciating the humour as preparations for the big end of term event get under way.

It becomes apparent that the quartet are obsessed by another (nameless) male classmate in their year who is physical perfection personified and intelligent to boot, but keeps himself a little aloof. They all want to be his friend but are at the same time jealous of his challenge to their superiority as the “super cool” senior pupils at the school.

The night of the prom arrives and the foursome play a nasty trick on their classmate after he dares to sit at another table with his 4th year prom date. Mayhem ensues with life-changing consequences for all involved including the school goat(!) John Wayne. The play finishes back in the real-time future at a 2016 class reunion.

This play touched on the pain of growing up, envy and deceit but the storyline seemed a trifle forced, slightly repetitive and at times rather far-fetched. A bit of judicial editing would have resulted in a far more satisfying piece.

Posted on March 22, 2016, in Uncategorized. Bookmark the permalink. Leave a comment.