Recent IASH/Traverse Theatre Creative Fellow Clare Duffy is a playwright exploring dark themes. What if you have a stroke to discover you are in a vegetative state unable to communicate but fully aware of whats going on around you. Meet Ian (Martin McCormick) and his wife Cath (Kirsten Murray) who are having to learn how to live together apart. The set communicates expertly the prison of Ian’s body and he is confined to his vertical coffin like structure throughout most of the play. Innovative and surreal, especially the way Ian’s body is described through inanimate objects cluttering his bed and his wife’s mind.

Despite their desperate circumstances, Duffy still injects humour into her play . 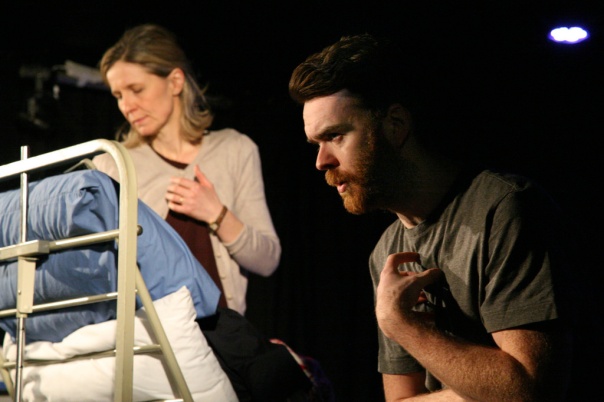 As Cath sets about washing Ian, he is concentrating hard to transport himself to China through his minds eye to see extinct volcanoes and a mirroring sea : he tries to smell the tea and not feel like the car being routinely washed. Cath was jealous of Ian’s relationship with his car believing he, ‘spent more time rubbing her down than you did me.’

Frustration to learn new ways of communication are explored in depth and with comic insight.

Ian’s locked in syndrome isn’t getting better and eventually their child grows up and has her own child. Cath has an affair and considers murder , ‘… death by chocolate ’ because after all, ‘how many ways can you kill your husband and not get caught? ’ The sensory experiences the audience are privy to are plentiful, from eerie screeching interference that best describes the torture going on in Ian’s head to the melancholic sounds of sea gulls in the distance and waves lapping the shore.

Ian’s launching off from his bed in the research centre in Houston where he’d like to, ‘ become a light particle ’ because he’s a ‘..post human space man…connecting to my space body.’ Will he keep going never to return? You will have to go to find out!

Posted on March 9, 2016, in Uncategorized. Bookmark the permalink. Leave a comment.