In this two-handed play written by Michael-Alan Read and directed by Gethin Edwards, we are introduced to the lives of Charles Laughton and Elsa Lanchester, one of the original odd couples of stage and screen from the 1920’s to the 1960’s. Elsa is played by Irish actress Abigail McGibbon and the talented but troubled Charles Laughton by Steven McNicoll, whose face may be familiar from the TV series Bob Servant Independent.

Mainly seen from Elsa’s point of view in a series of flashbacks the strange story unfolds of how two very contrasting characters came together and of their enduring marriage, which only ended with Laughton’s death from cancer in 1962. Elsa Lanchester, the attractive daughter of somewhat bohemian parents was making her way as a burlesque dancer and actress when she met Scarborough hotelier’s son Charles Laughton in a stage play. She lead a racy life as a society girl (she had an abortion at this time) and Laughton was in his own words “rubber faced and fat.” They married two years later in 1929. 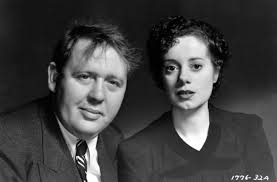 They both went on to have careers on stage and screen with Charles Laughton becoming a major Hollywood Star. Elsa Lanchester is probably best remembered for her part as the bride of Frankenstein in the film of the same name while Laughton had leading roles in Mutiny Of The Bounty, The Hunchback Of Notre Dame and many others. He also directed the original version of Night Of The Hunter, which has become regarded as one of the great Hollywood films of the 50’s. Even though Lanchester knew fairly early on in their marriage that Laughton was bisexual and that he admitted to bringing young men back to their home for sex she never left him and her obvious and undying love for him was at the heart of the play.

Although very well acted the piece did come across a bit as a potted history and it was left unclear as to whether Laughton had real feelings for his wife or the marriage was a cover for his homosexuality, which was illegal at the time. All in all though, a poignant play, which concluded with Lanchester quoting one of his sayings, “there is no time.”

Posted on February 29, 2016, in Uncategorized. Bookmark the permalink. Leave a comment.