Without Arthur Miller, the American cultural landscape will be full of so many errant tumbleweeds, but he stands in the middle of it all like some strong, juicy cactus, prickly as hell, but completely ingenious. The guy lived for ninety years, but it was in his mid-thirties, the time of a man’s premium intensity of intellect, that he completed his eloquent masterwork, The Crucible. In it we are driven straight into the heart of the Salem ‘witch’ hysteria of the early 1690s, in which through only four scenes we are told the overall story & tickled by a series of sub-plots which together form the most immaculate, composite whole. 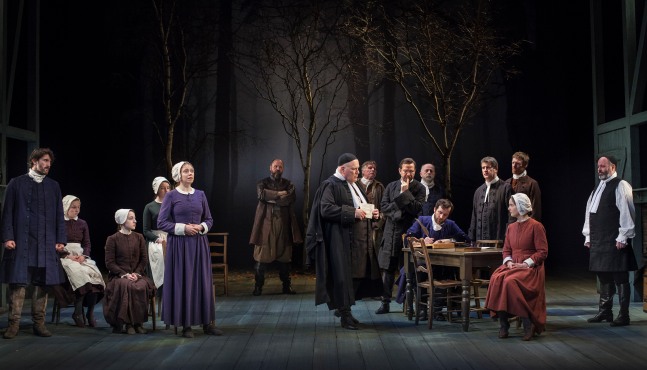 As we are ushered into a world of whispers, witches, warlocks, & the drinking of chicken blood, dramaturgically speaking, the play is perfect; each scene unveiling the development of each character’s personality, of which the hell-fire-raising then completely-bemused-by-everything-that’s happening Reverend John Hale is the most interesting. He is just one of a number of star turns from this brilliantly symbiotic cast, complemented by beautiful costumes & the most authentic New England accents I have heard outside of, well, New England (soft rrrrs included). Miller creates this world of words one would love to remain immersed in, with touches of ultra-modern humour tossed in with imperceptible nuancity.

Miller’s aim was to compare the persecution & labeling of women as witches with the Communist hunting of the McCarthy era, when people are condemned to ‘confess or hang.‘ In the same fashion, the play still resonates today – the suspicion present in 17th century Massachusetts has only been displaced onto other groups such as the Mexicans, or Islam. Paranoia has never left the American psyche in which lies a stagnating & deep-seated distrust of the different. But Miller also showed the other side of the story. Ron Donachie played Deputy Governor Danforth to perfection, a supercilious man with the remit of bringing order to that bewitching hurricane that blew through the streets & farmsteads of Salem. It was a time where people could enact petty personal vengeance on others by simply accusing them of witchcraft – Darnforth truly knew this, but was forced to uphold the law, for without it all would have descended into chaos – & thus 24 women were hung. 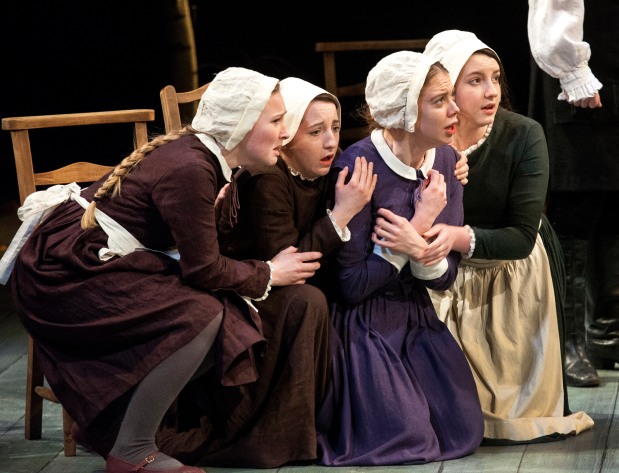 This play has a realistic fluidity, the sea-like cast ebb & flow into the nooks & crannies of the plot, & in the hands of director John Dove do so with optimum timing. Philip Cairns is a masterful, handsome lead – effortlessly growing into a more serious role after his ‘Kill Johnny Glendenning‘ & I look forward already to his next work. With the days getting longer this pretty little pre-spring, I urge on any theatre-goer to simply gasp with astonishment at the handling of Salems’ ‘black mischief’ by both Miller & the Lyceum players.

Posted on February 22, 2016, in Uncategorized. Bookmark the permalink. Leave a comment.