← East
How You Gonna Live Your Dash? →

What a privilege it was to witness this play by Victoria Bianchi , directed by Debbie Hannan, set in patriarchal wartime Britain. The set is dark like the plot, the painted fire a nice touch and the period wallpaper strangely vintage turquoise and gold. With January being a time of reflection we are transported back to January 1913 where the two characters Frances Parker (Beth Marshall) and Ethel Moorhead (Stephanie McGregor) encounter one another prior to Ethel’s first Suffragette meeting. The banter between the two women throughout is comedy gold.

By 1914 the Suffragette movement was becoming increasingly violent, with many buildings around Britain being bombed and burned. In July of that year, Frances and Ethel attempted to set fire to the Burns Cottage in Alloway: not as a slur on the poet himself but for the fact that his  words were being used to entice young men into the army. It also helped that Burns was dead and therefore there wouldn’t be any casualties while bombing his home and highlighting the Suffragette cause.. 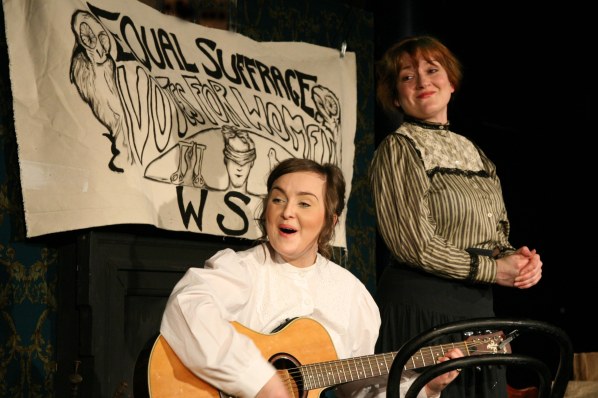 This play is about the planning stages of this bombing and the struggle the two endured on their long walk of almost forty miles from Glasgow to Burns cottage. It tackles the pitting of women against women in Mrs.Archibald Colquhoun’s speech and the role the media had in creating the myth that Suffragette women were hags and couldn’t get husbands. It is also about the loyalty between the two friends after Ethel is caught by a watchman on duty at the Burns abode. Although the plot is based on reality, Bianchi has chosen to send Ethel and not Frances to prison as was really the case.

While in prison Ethel went on hunger strike. Knowing that there was little chance of recapturing her if she was released, the prison authorities subjected her to brutal force-feeding in more than one orifice. Finally released to a nursing home, she managed to escape and return to Frances.

Ethel’s relaying of her court appearance to Frances is powerful, ‘I am at war with you. I can take your anger but not your pity…If we do not fight for it constantly with every fibre of our being then we will never achieve it.’ Ethel plays the guitar at times as she and Frances reinvent Burns songs such as A Man’s A Man For A’ That with lyrics that don’t mention men!

According to Oran Mor’s website, ‘CauseWay invites us to join with Frances and Ethel in their journey towards a fairer world and asks whether, over 100 years later, we’ve arrived at our destination.’ We clearly haven’t –  books such as The Beauty Myth by Naomi Wolf give us all the statistics we need that prove women are still fighting for their right to equal pay in a world where men clearly have the monopoly on fair wages. What better a venue to shine a theatrical light on this issue than Oran Mor in the heart of Glasgow’s West end. This is a play with punch that kicks off the season as it intends to continue.

Posted on January 28, 2016, in Uncategorized. Bookmark the permalink. Leave a comment.

← East
How You Gonna Live Your Dash? →