← And Then There Were None
After The Cuts → 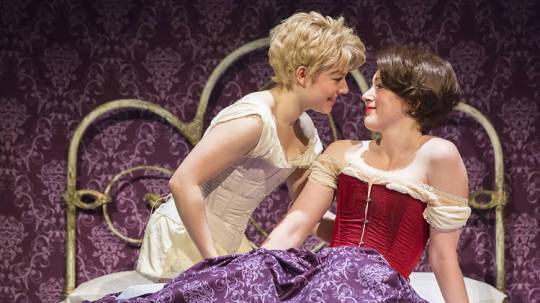 In a mischievous and captivating adaptation of Sarah Walters’ “Tipping the Velvet” by playwright Laura Wade, we are immersed within a theatrical 1890’s set, to begin the story of a colourfully edgy fish farmer’s daughter, Nancy (Sally Messham) whose obsession with onstage starlet Kitty Butler, played by Laura Rogers, results in an adventurous love affair with a kaleidoscope of magical situations.

Compered by David Cardy, whose powerful performance in top hat and tails finely relates the engaging and often tragic journey of the young adventurer, with captivating performances throughout, and a creatively adapted sound-track. We follow her adventure to London, where she embarks on catastrophic and remarkable twists to her life’s journey. Poignant and clever scripting is used to cleverly illustrate the prejudice of social class, sexuality and desire.

Sally Messham’s performance is thoroughly impressive as she pulls off modern satire within exemplary dance and song with effortless ease, she is a truly amazing talent. Laura Rogers is equally mesmerising and holds the audience gripped with her on-stage presence and utterly divine acting skills.

Cardy is thoroughly engaging as the narrator of the show, adding particularly sublime touches including a special adaptation of the script to applaud the splendour of the Lyceum. It is these attention to details, combined with an expert cast and the incredible use of countless theatrical tools which make this a first class performance which will undoubtedly smash the box office.

Gripping, colourful and comedic theatre at its absolute best, using first class contemporary and classical performance to discuss a multitude of social taboos and portray a delight of historic references. And it’s all done rather well. FIVE STARS

Posted on October 30, 2015, in Uncategorized. Bookmark the permalink. Leave a comment.

← And Then There Were None
After The Cuts →