← A Gambler’s Guide to Dying
How to Keep an Alien → 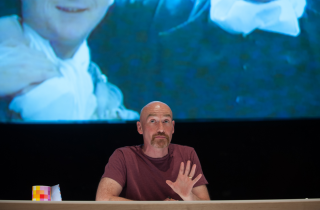 Divine is not well read up on Scottish Literary Talent. So before I went to this immaculate presentation and celebration of the life of a stranger. To be honest I didn’t have a clue. Now this is nae surprising. Paul Bright was a Glaswegian hooligan turned actor come play write of sorts, who was celebrated by a select few, He somehow managed to secure an Art Council Grant to make a film that was only seen by the select few. He enjoyed taking acid and made his film at Traquaire. Spooky coincidence No1. Divine loves Traquaire and has taken Acid there.

There is much to be taken from learning about the life of a man that didn’t as much make a dent of an impression on his critics. They hated his work, he got slated. I actually felt more akin with him than anyone else in the audience tonight. George Anton, tonights host. shunned Paul, once George Anton had achieved well paying roles in London, he told Paul that the relationship between them was over and that he had moved on. Paul died young at 47, leaving George Anton the executor of his estate. His estate comprised of one box. In that box was a tape of the telephone message that George left on Paul’s answering machine, ending the relationship between them. Were they lovers?

Or was this whole presentation the work of one man’s guilt at not been there for his friend?

Paul was Punk as Fuck. the whole Punk ethic of do it your own way shone through here. But what I dinnae understand is, What did he actually achieve? An unfinished film? A published book. Surely there are artists who are more deserving of the reverence that came forward tonight for a man that, well to be right fare, didn’t achieve much at all. I think this is why I enjoyed this lecture so much. What was represented tonight was a tribute to a misunderstood Genius who was never given the opportunity to heal from the battle scars of life Who knows what would have become had Paul been given the opportunity to heal. FIVE STARS

Art is a funny thing.
But I’m not laughing.
I’m thinking!
A tragedy, a fitting epitaph and a moving lesson in performance art.

Posted on August 20, 2015, in Uncategorized. Bookmark the permalink. Leave a comment.

← A Gambler’s Guide to Dying
How to Keep an Alien →