← Land of the Dragon
Francesca Francesca →

Tom is an ordinary father in on ordinary world. As a kid he was read the heart-warming tale of Ferdinand, a bull who preferred to smell the flowers rather than fight with the other bulls. Then he grew up, fell in love & had a boy, who he also called Ferdinand. Then he lost his wife & became a very hard-working single father. A one-man show played by the male half of the husband-wife theatrical team that are Tasty Monster Productions (Luke Tudball & Heather Bagnall),  the way Tom brings his wee son Ferdy to life is a wonderful piece of conjuration. 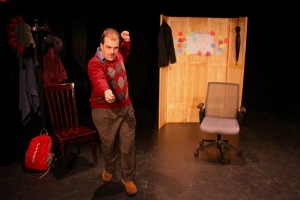 Ferdy’s growth curve is given us in a series of life-slices in front of a lovely set, with the central scene being the son’s tenth birthday party. Tom is called to work & the sadness of this invisible young boy really reaches out to the heartstrings. An excellently realistic piece, its stirs our deeper emotions with a placid simplicity, & like the perfect hollywood animated film, is designed to please both the children & the adults who accompany them. A wee gem. FOUR STARS

Posted on August 18, 2015, in Uncategorized. Bookmark the permalink. Leave a comment.

← Land of the Dragon
Francesca Francesca →