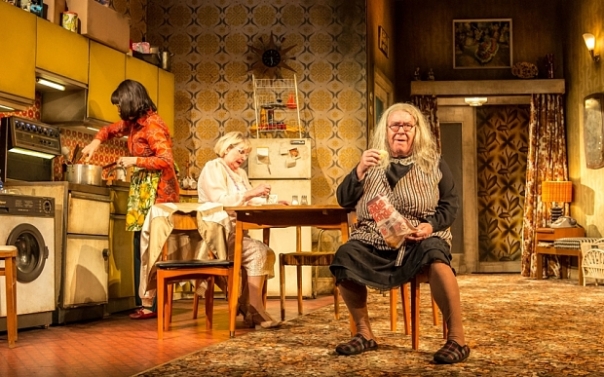 The National Theatre of Scotland’s star studded cast takes on award-winning Scottish playwright Douglas Maxwell’s version of Roberto La Cossa’s, La Nona. The Argentinian comedy classic, has been relocated to a flat above a failed chip shop in Glasgow. This is 1977, the year of the Queen’s Silver Jubilee, an era of turbulent economics and the pre Thatcher recession.

We are welcomed by a highly detailed 1970s stage set design. The hideously 70’s patterned stained walls have been manufactured in such a way creating the illusion of perspective. In hobbles Granny scoffing a family size packet of crisps. Played by Gregor Fisher and as endearingly repulsive as his Rab C Nesbitt, Nana clearly has an unyielding appetite. The housewife, daughter-in-law Marie (Maureen Beattie) nervously and frantically cooks the Russo’s family meal, as Nana devours the last few crumbs and eagerly looks around for her next course.

Cameron or Cammy, husband to Marie (Jonathan Watson) has big dreams to re-open his chip shop, The Minerva Fish Bar, in time for the royal Jubilee and re-enacts his imaginary meeting with the Queen over a sausage.

Auntie Angela’s (Barbara Rafferty) failed courtship with the families rival chip shop owner, Donnie Francisco (Brian Pettifer) means she resides with the Russo’s now. Angela’s a prim but dithery and innocent spinster who feels she is a financial hindrance to the family, yet blindly encourages Cammy’s brother, Charlie’s (Paul Riley) musical non-talent, a camouflage for his work-shy lazy attitude.

Airhead blonde daughter, Marissa, (Louise McCarthy) who would literally do anything to be her daddy’s wee lamb, proudly works for a Zen ‘chemist’ who – unknown to her – is actually a drug dealer!

All the while the plot line develops, granny is slumped in a seat consuming buns, crisps, toast, biscuits, stew or picking and eating crumbs between the folds of her clothes. Devouring every last morsel like an ill-mannered hog. When she’s not eating food, she’s talking about food!

As the poor struggling married couple, Marie and Cammy, discuss their financial problems, granny obliviously but happily licks the icing off a cake hidden by Marie. Marie exclaims Charlie needs to sign on and either Granny goes or her! One by one members of the family begin to realise Nana is the problem. At the ripe old age of 100 she shows no signs of decline despite brother Charlie’s best efforts. Charlie bribes Nana to visit the shows for candy, but devilishly leaves her there. The family anxiously search for her, she’s nowhere to be seen, Charlie attempts to persuade the family of their newly found freedom just as Nana returns full of joy with a lollypop… Cameron turns to Charlie and says “Maybe it’s time to take it to the next level…”

After the interval, the living room is noticeably considerably bare, evidence of Marie’s desperate attempts to sell household possessions to make money. Auntie Angela in an attempt to prove her worth unsuspectingly helps Marissa sell ‘energy pills’ and becomes delirious after taking some! Meanwhile brother Charlie comes up with a master plan involving the old perverted and horny enemy Donnie Francisco. Marie leaves in disgust, bailiffs take all their possessions and the family falls apart. And finally with every one of nana’s family either dead or fled, a pool of light shines down on her and she ogles the audience and repeats… “Whits that yiv got?!”

A surreal and hilarious piece loaded with surprises, 70’s sexism and economic realism we can still relate to today. FOUR STARS

Posted on June 4, 2015, in Uncategorized. Bookmark the permalink. Leave a comment.