The Head In The Jar 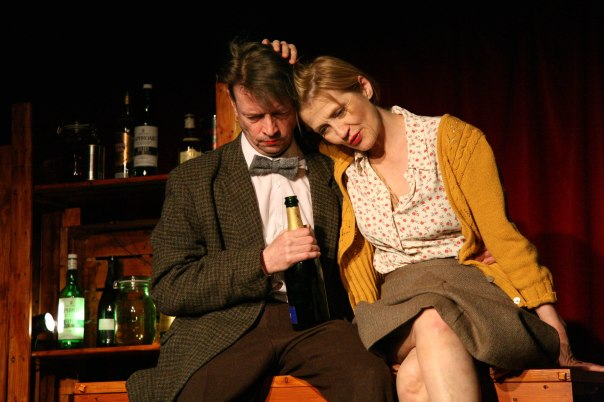 The play is about to start. Amidst the audiences chatter I pick out some words of an ongoing dialogue from Dylan played by Stephen Clyde.

The stage is set with bottles along the back wall.Caitlin Macnamara is talking to us in the opening scene with glass in hand contemplating the 20 years of hell she has had.She sings “Lilly the Pink” as she teeters on the edge of the stage talking to us , her Alcohol Anonymous colleagues..this fear filled lady in floral shirt,grey skirt and ochre cardigan tells us that “the 8th November every year” sets her off because “when I see drink I see Dylan”.Dylan is of course her former husband, writer Dylan Thomas,who was always too pickled to remember their three little children’s names.

Caitlin played effervescently by ex Glasgow School of Art pupil Gaylie Runciman looks us over as she laments, “How can I trust a room full of strangers when you can’t even trust yourself.” The action now goes back in time and the young dylan enters and they congratulate themselves on the bottles of champagne they are alone with while the rest of the pub have scurried underground after an air raid alarm.“We have enough champagne to live here for the whole war,” enough to outlive “fucking Hitler”

So from their youth and beauty which is described by Caitlin as cucumbers they gradually pickle themselves till Caitlin realises she is expecting. Dylans “whirling dervish” his “dancer,isn’t she amazing” is drinking her way without him through the upbringing of their offspring.She has to drink at home while he meets with his “liquid family” in the pub. 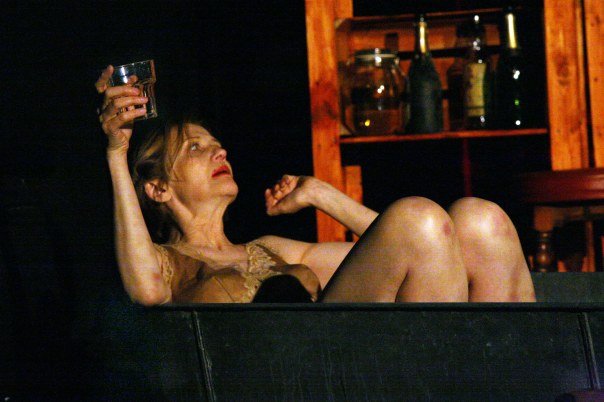 Years later Dylan enters from a three day bender and is confronted by a more gherkin like wife. She tries to get him in the bath telling him that their son, “is 15… where have you been. I’ve waited three days.” She refers to the 15 lost years when she tells Dylan that, “once placed in a jar of vinegar we shrivel.we were having too much fun… And the process cannot be reversed.”

While Caitlin continues with “red wine in my veins…beer in my ankles,gin in my eyes…flushing and rushing..pulsing me heart,” she knows that Dylan will go to New York and fulfill all his “cuntish possibilities,” as he steals the weins sweets after her refusal to go to the big apple with him.’

Caitlin is not a victim though, not even when he calls her from her memory every Nov 8th. She knew that he needed New York she tells us in present time as she addressees her undrunk beverage…”you had become his true love”.She thinks back to the phonecall telling her that Dylan is on his last legs and how she arrived plastered at the hospital after a drunken flight only to see that he had a women by his side whose identity was never revealed to her.

Now many Novembers later she is goaded by Thomas’ ghost to

We know now that she is victorious, she doesn’t need his fading voice in her head to “find love” in the past. She is ready for her her future as Dylan is confined to the memory of the alehouse, alone with his bottle. We believe the former Caitlin Thomas may be shrivelled but she will not remain a gherkin. This is highly humourous given its dark content.The script flows smoothly as we are transported to and fro between the living/dead/resurrected Dylan.The plastic bag over Dylan’s face describing his oxygen tank while he clutches a pint on his deathbed and the deep breathing in the background are both funny and disturbing.

One thing is for certain, this well directed offering by Alan McKendrick produced by Susannah Armitage is not to be missed.

Posted on May 19, 2015, in Uncategorized. Bookmark the permalink. Leave a comment.