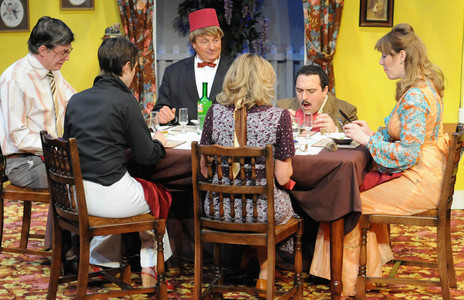 This Comedy play by the well-known author Alan Ayckbourn.is probably the funniest of his Norman Conquests trilogy. We witness six characters & their tangling relationships over the course of a bank holiday summers weekend in a county house. The story follows the amorous Norman, his wife Ruth, her brother Reg and his wife Sarah, Ruth’s sister Annie, and Tom, Annie’s next-door-neighbour. This play centers mostly on Annie and her futile attempts at a romantic fling in East Grinstead with Norman and Norman’s attempts to woo anything with a skirt.

The play was originally written and set in the seventies and for this production the set designers have perfectly reproduced a dining room of that time including horrific patterned carpets. Throughout Table Manners there I found many reminders of my parents’ observations life was in the seventies such as homemade wine brewed from various ingredients including carrots & food being made from a selection of tins as there were no shops open over the bank holiday weekend.

The play was well produced and well acted. Performances of note came from the misunderstood brother-in-law Norman and the long suffering Annie who had been left by the other family members to look after the aging mum (who you never see).I can recommend watching this wee gem : there is a smashing level of comedy throughout serving for an enjoyable evening’s entertainment.

Posted on May 3, 2015, in Uncategorized. Bookmark the permalink. Leave a comment.