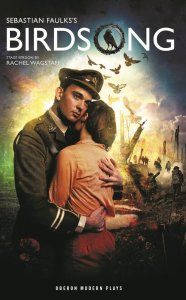 Rachel Wagstaff’s powerful adaptation of the acclaimed 1993 Sebastian Foulkes novel, does justice to the memory of the fallen of WW1. The challenges of bringing a novel which follows the ‘sappers’ – the tunnellers’ whose job it was to tunnel underneath the enemy to lay mines – have been overcome by a superb production team.

The story is set in France during WW1 on the Western Front and follows the lives of a group of sappers in the awful conditions that they survived in a century ago. Living 80ft underground they were sleep-deprived, undertrained, and in constant threat of tunnel collapse, being blown up by enemy mines and being trapped until the oxygen ran out and they were asphyxiated.

The Officer in charge is Stephen Wraysford a man increasingly realising the futility of war as he witnesses all humanity being washed away in tunnels dripping with blood that seeps in from the shell-holes on the battlefield above. The use of flashbacks takes us back to Stephens’s life in Amiens, before the war, where he fell in love with a married Frenchwoman Isabelle Azair, played by Emily Bowker. These changes are handled with skill by the cast. Through watching the human casualties mount up Stephen rediscovers his own humanity as he finds himself trapped underground with Jack Firebrace (Peter Duncan) in the final scene.

The production captures the constricted and torturous lives the men lived. It manages to communicate their longing for family, and the close bonds that necessarily take the place of family on the front lines. The Set Design (Victoria Spearing) and eerie lighting design (Alex Wardle) add enormously to the atmosphere as does dramatic use of explosive sound effects. The stage design manages to cope admirable with the necessity of scenes as varied as tunnels, trenches and pre-war Amiens. A violinist and singing Cartwright character (James Findlay) adds occasional lamenting elements at appropriate moments of pathos.

Birdsong is an impressive and poignant production. The 12-strong cast put in strong performances, often doubling as other minor characters (my only gripe being a couple of wobbly accent) and even the programme is a wealth of information, not just on the show but also in historical context of WW1 – there is an excellent information pack available for download on the shows are welcome additions when dealing with such a monumental human tragedy. FOUR STARS

Posted on April 22, 2015, in Uncategorized. Bookmark the permalink. Leave a comment.