← The Woman in Black
Birdsong → 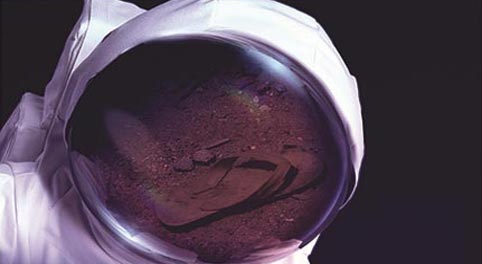 When I went to review this I had no idea what to expect I had invited my husband as I thought he would enjoy the subject matter of space. On going into the performance we were given head phones, this made me worry a bit to what I had taken him to.

There was no reason to be concerned, as on sitting down and putting the headphones on you are totally drawn into the world that is being created for you on the stage. I had read briefly the program which explained the performance would be telling two stories along side each other one about refugees fleeing from Mozambique to get to Spain, while the other story was detailing the 1st human going into space.  I wasn’t sure how this could work as the stories seemed too far removed from each other but the theme of human endeavor brings them both together, they are both life changing events driven by hope and dreams.

The audience and myself were totally drawn into this performance from start to end. In the beginning it is sound checks you hear, but even this draws you in, and each sound makes you want to see what happens next. Both stories are told through dialect and music with minimum actions. At a point in the play the performers want to convey the illusion that the performance is paused they do this by silence and standing dead still for what feels like minutes. It is a joy to watch how talented they all are.

*
The stories are told beautiful through the medium of speech, music and the projection of images on a large screen. If you have a chance to go and see this I would highly recommend I will be looking out for work by Kai Fischer in future a very talented director.

Posted on April 20, 2015, in Uncategorized. Bookmark the permalink. Leave a comment.

← The Woman in Black
Birdsong →