← Hedda Gabler
52 Shades of Maggie Dirty Dancin’ in the Pub → 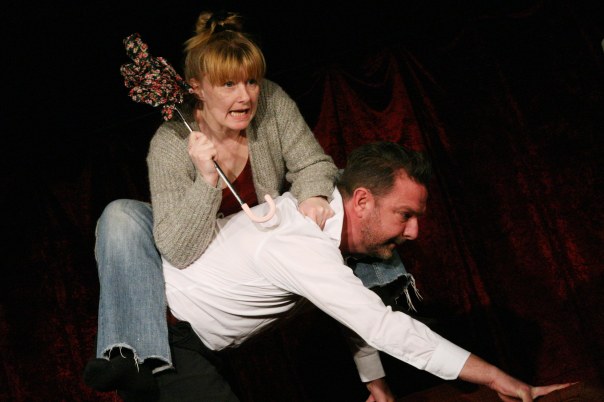 This week’s Play, A Pie And A Pint is a two-hander set in Moira’s (Meg Fraser) rented flat. She has been carrying on a ten year affair with married family man Peter (Richard Conlon). Writer Alison Carr has created some cracklingly (pun not intended) funny dialogue as the two characters sit down to a meal which becomes more and more interrupted by a growing crack and bulge in the ceiling above them.

The ever-increasing fissure serves as a metaphor for the couple’s relationship which is going nowhere fast. Peter is quite happy to carry on the way things are but Moira is fed up being “the other woman.” She has eaten herself fat to keep him happy but, for all her effort to please him, Peter admits that although he loves her, he loves his wife too. The situation is never going to change and deep in her heart she knows it. 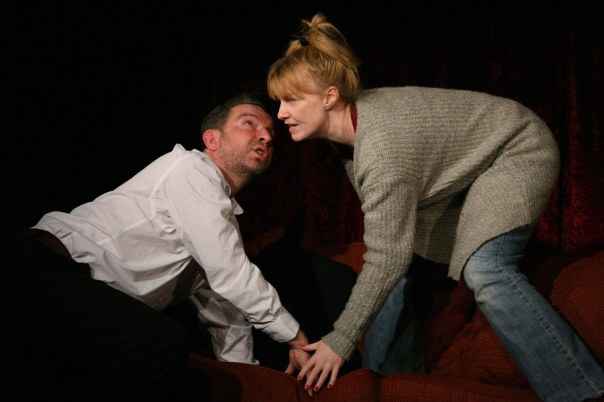 The comic interplay between the two cleverly reveals underlying issues of relationship, self-image, self-worth and how love won’t necessarily conquer all. The packed (again) audience enjoyed a good many laugh-out-loud moments and there were a couple of gasps of shock from them too. Meg Fraser’s comic timing, in particular, really added a lot to the experience The sound effects as the play developed were particularly effective. If you want to know what’s causing the crack in the ceiling you’ll have to go and see the play for yourselves. I felt there was a slight loss of pace in the last quarter of the play, but, even so, Fat Alice is well worth an hour of your time for some absurdist fun-and you will cheer at the end.

Posted on March 30, 2015, in Uncategorized. Bookmark the permalink. Leave a comment.

← Hedda Gabler
52 Shades of Maggie Dirty Dancin’ in the Pub →