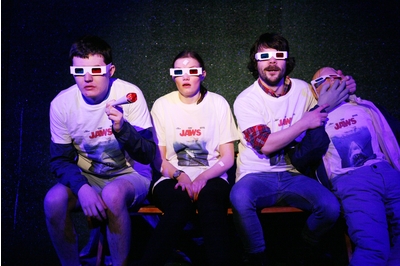 It’s a testament to the hardy Play, A Pie and A Pint audience that they turned out in such numbers on a vile, freezing and dreary wet Monday to watch the opening day of this week’s play, Lifesaving, by Rob Drummond (who has trained as a wrestler and magician to appear in his own works), is set in an imaginary green grassy space with picnic table centre stage. Two of the characters enter, a teenage girl and her older brother- the brother carrying a life-sized dummy used for CPR training- or Lifesaving. At this point the play is almost a monologue, with female character Sandra, played brilliantly by Lynn Kennedy, talking to, or at, her older brother Jamie played by Daniel Cameron.

As the play progresses it becomes apparent that he has learning difficulties and an obsession with lifesaving and CPR. There were some genuinely hilarious passages in the opening scene, which had the audience in stitches and the CPR obsessed Jamie’s serious responses made it all the more amusing. It eventually becomes plain that they have run away due to something terrible Jamie has done, that Sandra is protecting her childlike brother and that they are waiting for “Andy” who will miraculously solve everything for them.

Unfortunately for Sandra and Jamie it isn’t Andy who turns up, but Neil, his psychotic brother, played by Ross Mann, and Neil has a particular fancy for Sandra. The play touches on issues of adolescence and sex, disability, loss and how to deliver CPR properly. The unravelling scenes were linked by sound montages from the 70’s classic horror Jaws and Neil was definitely a circling Great White in Sandra and Jamie’s fragile world. This was enjoyable and engrossing stuff from beginning to end and, as such, is highly recommended. An hour passed in a flash.

Posted on March 3, 2015, in Uncategorized. Bookmark the permalink. Leave a comment.