← Hooray For All Kinds Of Things
Butterfly → 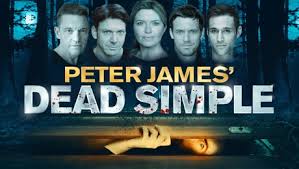 The King’s Theatre is a beautiful venue with ornate marble stair cases, stained glass and carved wood. There is also many ornate plaster cast sculptures in the auditorium, your eyes are kept busy as you are reminded of the regal olden days of theatre! Dead simple is an adaptation of the novel by Peter James. It begins in Brighton and instanly reminds me of the movie Shallow Grave. The playful communal behaviour of financially adequate (posh) property developers. Two friends Michael (Jamie Lomas; Stella, Eastenders) and Mark (Rik Makarem; Emerdale, Torchwood.) Our lead lady Ashley ( Tina Hobley; Holby City, the Bill), Michaels soon to be bride and her Uncle Bradley ( Michael McKell; Casuality, Emerdale)have candid character building joviality in a grand sitting room. They are happy but we all know this isn’t going to last.  The reason for this coming together is the wedding and a planned stag do….and a prank which involves the groom being buried alive in a coffin. Michael has to contend with suffering the worst fate that is possible, particularly when he discovers all but one of his friends have been killed in a car accident. The only person that can help him is Davey,(Josh Brown; Grange Hill, Shameless) a young man with learning difficulties who lives with and in constant fear of his father. He plays computer games in front of the T.V. in his bedroom and talks to Michael via a walkie talkie he finds at the crash site. We can see Michael through a veil in a hidden compartment behind the bedroom wall. The effect works well as a way of being able to experience the two contrasting environments at the same time. The use of the walkie talkie is not the only time technology is used as a plot device. Mobile phones, texts and recorded messages are used throughout this show in way where you know it would be impossible without them.

The story sees many unexpected twists, surprises and MURDERS. Lighting and sound effects make the whole show intense and moody. Particularly effective scenes were of cars approaching and turning in the woods of the burial site. This is achieved with a limited amount of space . Dark periods were made to create the feeling of suffocation, just like the fate of the man in the coffin. This is broken up with plenty of humor, our detectives are commonly joking around and taking cracks at each other as is familiar in T.V. Detective dramas. Our manipulative leading lady’s character hails from Morningside and I assume this will change at the plays next location, it was a nice touch for a place to be familiar…even if it was the location of a tragic car accident. Or was it…really you need to see this play to see all the twists and even if you don’t get a chance to I wouldn’t want to ruin the book either. The presence of familiar T.V. soap opera faces makes it reasonable to assume that this show isn’t supposed to be constantly intense, certainly the two ladies behind me find most of the show hilarious so we don’t hold back at the parts where we are not sure we should be laughing. ( Safety in numbers!) Its always interesting to meet regular theater goers and for these ladies this is just the first of three shows this week! FOUR STARS

Posted on February 5, 2015, in Uncategorized. Bookmark the permalink. Leave a comment.

← Hooray For All Kinds Of Things
Butterfly →