Hooray For All Kinds Of Things

By way of an explanation to those of you who have not come across the phenomenon that is A Play, A Pie And A Pint before, they are one hour plays performed at lunchtime in the crypt of what was once a large church, the entirety of which has been converted in to a bar/venue/restaurant complex called Oran Mor situated at the very top of Byres Road in Glasgow’s West End. The owner of the building, Colin Beattie and the Scottish actor and playwright, the now sadly deceased David MacLennan, had the idea of putting on lunchtime plays in the crypt. For your money you get, you guessed it, a play a pie and a pint (quiche, wine and soft drinks also available). The doors open at 12 noon which gives you ample time to finish your pie/quiche, read a paper or chat to your pals in the relaxing surroundings before the performance commences at 1 o’clock. 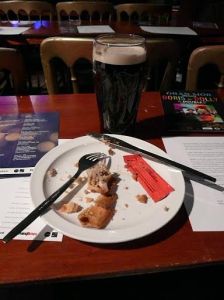 This week’s play, “Hooray For All Kinds Of Things,” was written by, and featured Sandy Nelson (Chris the postie in Still Game and self-confessed Jon Gnarr afficionado) in the lead role as Icelandic stand-up comedian and non-conformist ex punk, Jon Gnarr, who stood for and won the mayorship of the capital of Iceland, Reykjavik, in 2010. Supporting cast were Rebecca Elise as Heida Helgadottir as his election agent and (the very lanky) Jamie Scott Gordon as ageing punk and co-conspirator Ottar Proppe.

In 2008 the banking-led Icelandic economy had imploded and the population were completely fed up with traditional politicians who had led Iceland to the brink of total ruin. Into the breach strode Jon Gnarr and “The Best Party.” This play basically tells the story of what happened from The Best Party’s beginnings as a joke to cheer up the people of Iceland through to Jon Gnarr’s election as mayor of Reykjavik, by means of several scenes strung together as a flashback from Gnarr’s(Nelson’s) opening stand-up routine.

The Best Party stood for “Sustainable Transparency” and had the snappy slogan, “Hooray For All Kinds Of Things.” Aims included; A Polar Bear in Reykjavik zoo, free towels at the public baths and A Disneyworld with free entry for all. Gnarr proudly proclaimed that when elected, “I will go back on all my election promises.” They exposed icelandic politics for the worn-out, self-seeking, hypocritical mess it had become (some parallels with the UK I think) and in doing so won an election against all the odds.

The play, directed by Gary McNair was very tightly written and never faltered over the hour’s duration. There were many hilarious moments including a very different version of “Simply The Best”(pun intended) which got a great round of applause from a very appreciative audience. A serious point was made, along the way, of the importance and place of Art and artists of all kinds in modern society. The acting and delivery was of the highest order and the only (very) minor criticism was that some of the lighting cues were not up to the mark. Much recommended. FOUR STARS

Posted on February 4, 2015, in Uncategorized. Bookmark the permalink. Leave a comment.