‘Slope’, is a play about the turbulent yet loving relationship of the two 19th century French poets Paul Verlaine and Arthur Rimbaud. The production by Untitled Projects is not in period costume or dialect which really paid off with all the quirks included. Stewart Liang, the director, has taken risks in a thought provoking way. The show is streamed online so the stage is awash with cameras and filming gear which adds a layer of excitement. Sense of smell is used to stunning affect when a dead mackerel flops on, then later a smokey smell graces us with paper being set alight. 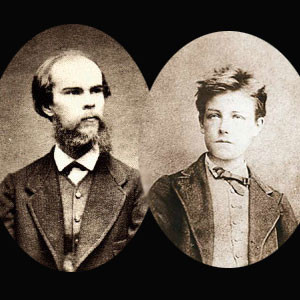 The live audience are ordered by actors (wonderfully snapping out of character) to hold up pieces of paper for the streaming audience – with barriers being broken this production is certainly a interactive and memorable experience on a classic story. ‘Slope’ does not include the poetical works of Paul Verlaine or Arthur Rimbaud in a solid state, making it less biographical and historical. It is a gripping, modern interactive theatre piece in it’s own right that deserves to be talked about. The performances from James Edwyn, Jessica Hardwick and Owen Whitelaw are emotion based in a cinematic style at times. Performed with quality and dedication throughout, I will not forget this evening for a long time. FOUR STARS

Posted on November 27, 2014, in Uncategorized. Bookmark the permalink. Leave a comment.