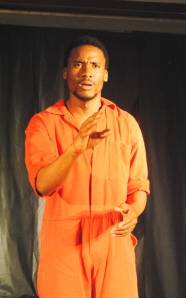 Skierlik (Tswana for ‘suddenly’) is an informal settlement just outside Ventersdorp in the North West province of South Africa. At least it was before 2008.  You won’t find it on Google Maps. Now renamed, the shanty township is about 100 miles North West of Johannesburg, and about a million miles away from the beating heart of Central Glasgow; at least it was until Phillip M Dikotla took us there in his, deservedly, award winning one man play.

You might find reference to Skierlik if you search the web for news articles. You’ll see sensational coverage of a shooting spree that took place there, and exhaustive reporting of the trial and the life sentence handed down to the perpetrator. You’ll get to know his name, see pictures of him and access a whole series of biographic information.  If you want to know about his victims you’ll need to dig a lot deeper. Thankfully you won’t have to dig too deep into your pocket to experience Skierlik for yourself. Currently running at CCA on Sauchiehall St, (Extra performances scheduled for Sat 8thand Sun 9th Nov 2014 – Some tickets still available)  and heading next to Live Theatre in Newcastle, this is a profoundly rhythmic journey which explores the shocking event and the impact on the survivors.

Meet Thomas as he takes us back to the place where his 31 years old wife, (Elizabeth) his 3 months old child, (Anna) and friends and neighbours, (Sivuyile, 35, and Enoch Tshepo, also known as Tikilion, 10) were randomly murdered in the heat and dust of this “post-apartheid” rural settlement. The intimacy of the almost bare stage at CCA lent itself well to a story of loss, pain, bitterness, anger, and eventual acceptance of change as Phillip unraveled his tale to a small, silent and totally absorbed audience. This was neither Monologue, nor Presentation; this was Performance! The after show Q & A was almost as interesting as the drama itself. The audience and artist shared their thoughts on some of the many questions raised. THREE STARS

Posted on November 7, 2014, in Uncategorized. Bookmark the permalink. Leave a comment.