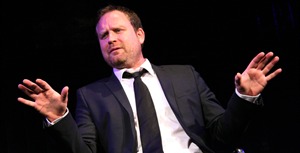 “Money means power and freedom.
Who’s not interested in that?”

There was something terribly infectious about this rendition of Andy Duffy’s one-man monologue, Crash. The play is essentially a guy on a chair chatting away, & as he took his first tentative steps through the script, I found myself thinking this might not be the most enjoyable hour of my life – yet within five minutes or so those baby steps had become Vishnu-like strides, by the end of which march I was left wishing for more.

The story revolves around the wheeler-dealings of yer classic money-making stock-market trader, whose life slowly begins to unravel around him, hence the plays title of ‘Crash.’ From family life to the angry cut & thrust  of his often desperate profession, we gain a real insight into the tragic possibilities that surrounds such a culture.

With the entire play being performed solo, it is only the tony-blair like hand movements that offer any real visual stimulation. The script, however, was excellent… peppered with witticisms, Crash is a modern take on a classic theme, & would not have been out of place at the theater of Dionysus in Pesistratan Athens, whose audience would enjoyed similar rhapsodic performances. The intensity was perfectly pitched, with the plot’s disparate nuances rising to the climax like ribbons on a maypole. Plus the pie & pint were well tasty today (bacon gravy). FOUR STARS

Posted on October 29, 2014, in Uncategorized. Bookmark the permalink. Leave a comment.