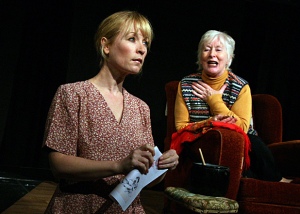 Verging on the edge of old-age dementia, AJ Taudevin’s ‘Mrs Barbour’s Daughters’  begins with Mary (Anna Hepburn) perched on her fading armchair listening to her old ‘wireless.’ Not long after she is joined by her ditty-singing, wide-smiling niece/care-worker Joan (Libby McArthur), who tries her best to cheer up her old auntie. For Mary,  the respite from her old-age angst is only temporary, for as soon as Joan leaves, Mary is left with her memories.

These are set in & before World war Two, & constitute the tensions between Mary & her sister,  Grace (Gail Watson) which led to a 50-year, unresolved feud. The backdrop is the suffragette movement, which helps to shape an amazing scene which sees the stage floor filled with anthem-singing theater staff. The play’s Glaswegian setting, is an apt choice, for of all of Scotland’s cities, this was the one to really embrace the quest for the  female vote.

I often find multi-generational theater a difficult vehicle for the Coleridgean ‘suspension of disbelief’ – but through the medium of nostalgic vignettes it all plays out rather well indeed. Of the two ‘arenas,’ I found the modern-day pieces eminently more enjoyable; Anna Hepburn makes a very engaging ‘woman of a certain age,’ who portrayed her borderline dementia with panache. A fine play – THREE STARS.

Posted on October 15, 2014, in Uncategorized. Bookmark the permalink. Leave a comment.