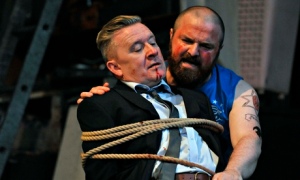 Post-festival season, the Mumble was up & running again just in time to review DC Jackson’s black comedy, Kill Johnny Glendenning, at the Lyceum. It begins in a run-down, horror set of an Ayrshire farmhouse where we meet Glasgow gangsters, Dominic (Philip Cairns) and Skootch (Josh Whitelaw) who have kidnapped tabloid journo, Bruce (Steven McNicoll) and are awaiting the arrival of their underworld boss, MacPherson (Paul Samson). What ensues is a double-act of hilarious exchanges, followed by bloody scenes of revenge and filled with dramatic tension all the way up to the surprise denouement of Act 1. In Act 2 we flashback to a West End flat in Glasgow and the events which lead up to the action in the previous act are revealed.

This is a strong ensemble piece with some excellent comic performances. In particular, David Ireland’s psychotic, Aswad-loving, ex-paramilitary Johnny Glendenning who bristles with menace. Kern Falconer is a scene stealer as deadpan hick, Auld Jim and reminds us exactly why he is one of Scotland’s finest character actors. The only weak point within this production was the clumsily-executed fight sequences which lacked authenticity at times. However, it’s DC Jackson’s ninja-sharp script which is the real star of this production. 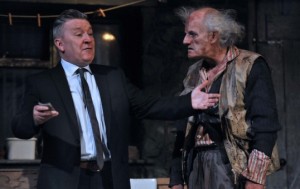 The gallows humour, rapid-fire dialogue, uncompromising violence and engaging plot put him in league with contemporaries such as Martin McDonagh and it will only be a matter of time before his talent propels him into the major leagues. FOUR STARS

Posted on October 13, 2014, in Uncategorized. Bookmark the permalink. Leave a comment.