← Victims of Influence
A Little Nonsense → 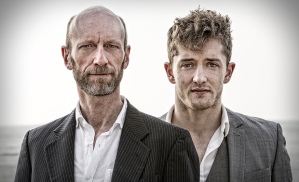 It is a brave soul that takes on Shakespeare; it is a braver soul that posits what (or who) may be the true inspiration of Shakespeare’s works. ‘The Sonneteer’ tries to do exactly that.  Sebastian Michael’s new play explores the relationship between the bard and his “fair youth” Henry Wriothesley, 3rd Earl of Southampton to whom he dedicated two narrative poems.

This seductive and passionate imagining is interwoven with a modern relationship between lecturer and student.  Through language and use of lighting,  each set of lovers are clearly identified.  Michael plays both older lovers whilst Tom Medcalf plays both student and Wriothesley, and is the true star of the show.  He is young but the sonnets caress and roll of his tongue masterfully infusing a command, not just of language, but of the complex and confusing idea of love and lust.

Historically, we may never know the truth behind the world’s greatest writer but this play makes a damned good effort in exploring one possible facet of his life.   ‘The Sonneteer’ demands from its audience full attention and even if one is not completely sure what is going on,  the sheer physicality of the actors and the rhythmic singsong of the sonnets will keep minds engaged FOUR STARS

Posted on August 14, 2014, in Uncategorized. Bookmark the permalink. Leave a comment.

← Victims of Influence
A Little Nonsense →