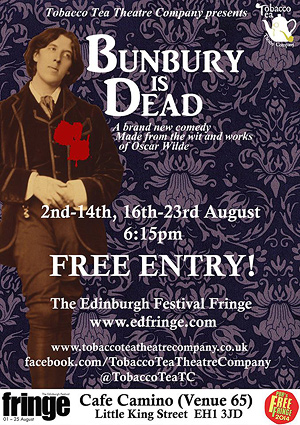 “Men marry because they are tired;

women, because they are curious: both are disappointed.”

Café Camino, a stones throw away from York Place is where Christopher Cuttings production ‘Bunbury is Dead’ is held. It is an original play, based around the famous quotes and plot twists of Irish wit and dramatist Oscar Wilde. It is sort of a sequel to the ‘Importance of being Earnest’ and it plays great tribute to the classic comedic masterpiece in writing and performance.

It is a play based around Algernon and his fictitious alter-ego Bunbury which is played by George Mills – really playing up to the stubborn yet high-flying Victorian. Mills shows shire understanding and dry humour in which to the audience reacted with laughter. The most breathtaking performance is from Peter Baker as Rupert, listing off Wilde’s beautiful quotes like he was on stage at the St.James Theatre in 1895 with wonderful camp naivety in his girl chasing character. Every audience member laughed and smiled at the charm of this production.

Some set and costume issues don’t make this play particularity easy on the eye however considering this is a part of the free fringe it really is worth taking this with a pinch of the Edinburgh spirit. Great comedy performances and clever writing won’t leave a Wilde fan disappointed – as this really is unique. A serious credit to this festival. Four stars.

Posted on August 12, 2014, in Uncategorized. Bookmark the permalink. Leave a comment.