← All That Malarkey Presents…
CHILDREN OF MINE →

(other days are the sequel to this production) 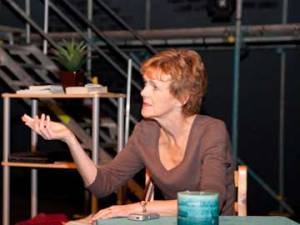 Double Booked is written and performed by Ginny Davis (http://ginnydavis.com) and is the first play in a 4 part saga charting the rather banal goings on of Ruth Rich and her family.  Ruth is a housewife mother of three and all the characters from the ageing granny to the teenage son are played by Ginny Davis in this solo performance.  Her acting is better for some of the characters than for others but I have no complaints over the standard of her performance – her delivery of lines is excellent and the script is well produced.  It’s the subject matter that bores me.

I don’t really find the humdrum of a middle class family life (and a rather dull family at that) are the stuff to excite festival fans.  There are a few laughs in there that tickled some in the crowd but not me.  I understand that Ginny likes to specialise in plays about family life but maybe she could inject some excitement into the storyline keep the paying public awake in this attic hotbox.  For those who do the sequel to this play in on alternate days. TWO STARS

Posted on August 9, 2013, in Uncategorized. Bookmark the permalink. Leave a comment.

← All That Malarkey Presents…
CHILDREN OF MINE →